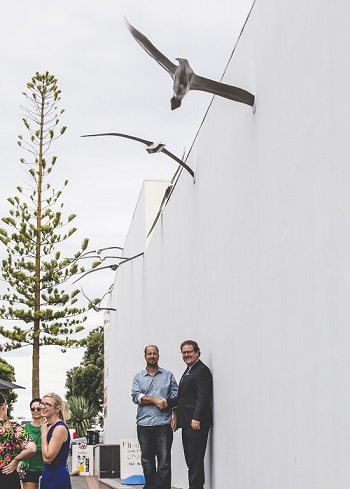 The Napier CBD’s newest sculpture has been installed in Paxie’s Lane.

Flight of the Return, by Napier artist Philipp Meir, is a stainless steel installation of some of Hawke’s Bay’s most regular visitors – gannets.

Philipp initially studied architecture before completing a BA in Visual Art at EIT Hawke’s Bay, and an apprenticeship in Germany to a master builder.

He has exhibited his work throughout New Zealand and Australia, and in Singapore, and been a regular collaborator with many New Zealand councils around New Zealand on public art projects and sculptural playgrounds.

This sculpture has special meaning for Philipp, who moved with his family from Germany to Hawke’s Bay when he was 10. It’s a positive expression of what his family and many others from other countries have felt upon arriving in the Bay.

“To me the gannets are a symbol of freedom and lightness. I also think, personally, that if we hadn’t moved here, my creative side would never have had the chance to blossom in the way it did,” says Philipp.

The sculpture was created thanks to a grant from Napier City Council’s Arts Advisory Panel. The lane is a busy thoroughfare connecting Hastings Street and Marine Parade in Napier but up until now has lacked something for passerby to look at.

Community Development Manager Antoinette Campbell, who was on the Panel, said Philipp had certainly changed the lane’s outlook for the better.

“We’re so pleased with what Philipp has created. Aside from its obvious artistic merit, it’s the sort of sculpture that will leave a long-lasting impression on anyone who sees it.”

Paxie’s Lane is named after a Greek family who were part of Napier’s retail culture since before the 1931 Hawke’s Bay earthquake, starting with their café named The Zealandia in the adjoining Paxies Building. A tea shop or restaurant continued to operate after the earthquake rebuild of 1932 until 2006 when the last Paxie proprietor, Nick Paxie, died. The lane was named in the Paxies’ honour in 2013.

Photo caption: Philipp Meier and Napier Mayor Bill Dalton at the official unveiling of Philipp's sculpture "Flight of the Return" in Paxie's Lane.