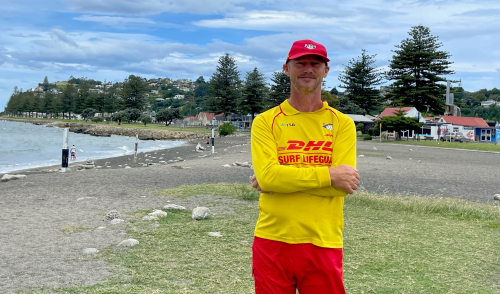 Napier’s Hardinge Road is loved for its waterfront playground, its ‘hot chicks’ and its ‘cool cats’. Now surf lifeguards will make the popular stretch of shore their home base to help beachgoers enjoy a safe summer.

Surf lifeguards from Pacific Surf Lifesaving Club will patrol the Hardinge Road Beaches, from Perfume point to Port Beach, from December until March 2023. This is a change of location from their previous patrol area of Marine Parade, which after extensive research has been deemed unsafe for swimming.

The move comes after a Surf Life Saving Club Coastal Safety Report carried out by Surf Life Saving New Zealand earlier this year signaled a need for surf lifeguard patrols at Ahuriri, Port and Sandy beaches. It also found there is no need for patrols at Marine Parade due to extremely low numbers of beach users over the summer period.

Dr Mick Kearney of Surf Life Saving New Zealand says it is a positive outcome for locals and visitors who make the most of the beaches over summer.

“This is a great initiative and benefits everyone involved as there will be increased safety measures at some of Napier’s busiest swimming locations all through summer,” Mick says.

Pacific Surf Life Saving Club will have a tower based in front of the Harbour View Motel with flags located on Hardinge Rd Beach between Perfume Point and Hot Chick.

“‘It makes sense for lifeguards to go where the people are,” Richard says.

“Marine Parade beach is completely unsafe for swimming. It is really important the Napier community helps spread the word to visitors that may not be aware of the dangers: stay well away from the water at Marine Parade.”

Surf lifeguards will start weekend patrols on Saturday, 3 December and run until Sunday, 5 March 2023. Council-funded weekday lifeguards will also patrol this location over the school holiday period from 19 December to 27 January.

Napier City Council has recently installed permanent water safety signage along the 11km stretch of Marine Parade, telling beachgoers of the dangers and risks of the Marine Parade beach. Council will also kick off its water safety campaign in a few weeks, which will remind people of local ‘safe swim’ areas and reiterate the message: “No swimming at Marine Parade”.

Richard Munneke says, “We want locals and visitors alike to have a safe and enjoyable summer, making the most of our attractions, and we are grateful to our surf lifeguards who are dedicated to making this happen.”