Five seals from Napier’s Marineland have arrived at their new homes in Australia. 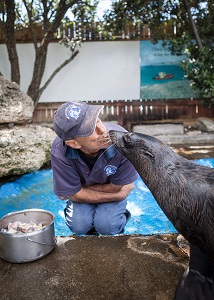 The seals left New Zealand on Wednesday morning and are now in quarantine.

“Staff have reported back that all the seals are very happy and are all doing well,” said Napier City Council Tourism Services Manager Neil Fergus.

Their journeys were somewhat unconventional with them being transported from Napier to Auckland on a Royal New Zealand Airforce Hercules plane.

The Royal New Zealand Airforce stepped in to help the Napier City Council to get the animals to Auckland International Airport. The commercial flights from Napier were not big enough to take the animals’ travelling in crates and a road trip would have added several hours to the journey.

Iha is now at Melbourne Zoo, Ollie at Sydney’s Taronga Zoo, and the other three at Sea World at Surfers’ Paradise.

The animals will remain in quarantine in Australia for 30 days before joining their new zoo-mates.

The three remaining Marineland fur seals - Molly, Mr Bo, short for Mr Bojangles, and Pania will travel to Australia in March next year.