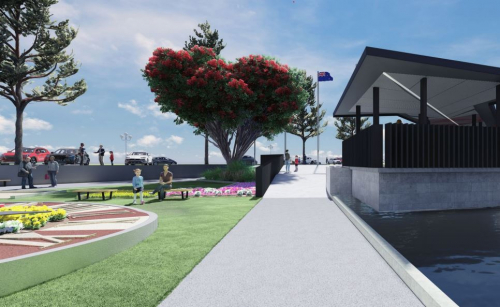 The Roll of Honour plaques and the Perpetual Flame will be returning home to Marine Parade, taking pride of place in an outdoor setting next to the existing War Memorial building.

As well as the memorial elements, there are several special features to the design. These include water features, a mauri stone, artworks, seating, and five flagpoles, to allow the flags of the armed services, the merchant navy and the national flag to be flown at the same time.

The design acknowledges the original 1950s design by the late Guy Natusch, based on the recommendations from the heritage architects endorsed by Mr Natusch. The War Memorial, built by public subscription in 1957, once stood outside the building. It was later enclosed within a foyer inside the building during the 1995 renovation.

The combination of respectfully restored pieces and new features honours the memory of those who made the ultimate sacrifice, says Kirsten Wise, Mayor of Napier.

“I am excited to see the development unfold over the next few months. This is a special moment for us and the community.”

The fact members of the public wishing to pay their respects to those who served will be able to do so at any time with the new setting outdoors is also important, she says.

The floral clock, currently undergoing specialist restoration, will also return to Marine Parade and a new location, several metres south towards the Soundshell.

For more information on the War Memorial restoration project, and to view a fly through of the design concept, go to napier.govt.nz #napierwarmemorialproject.