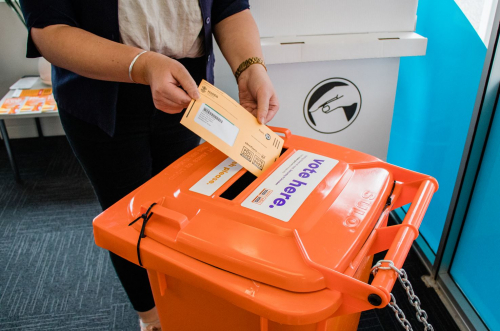 Ten thousand who can, have done so. That still leaves 35,000 left to do it with only three sleeps until the big day.

Voting in the local body elections closes on Saturday at noon and in Napier only 21% of the voting population has ticked the boxes. Postal voting has closed and voting papers must now be put into the orange voting bins located at community hubs around Napier. These will be collected on Friday at midday.

A drive-thru voting booth will then be open from 8.30am-12pm on Saturday 8 October at the Napier City Council Customer Services Centre, 215 Hastings Street, Napier.

“There are lots of ways our community can be involved with the work we do, first and foremost is to have their say by voting for who they want to represent them,” says Richard. “It’s important people vote because their elected representatives will be their voice at the decision-making table for the next three years.”

A total of 21 candidates have put up their hands to represent Napier in four wards: Ahuriri, Onekawa-Tamatea, Nelson Park and Tardale. Of those running, 11 were councillors in the last three-year term and are running for their spots again.

Nelson Park and Taradale each have four councillors while Ahuriri and Onekawa-Tamatea have two. Ward representation is calculated by population with one councillor for every 5,000 people.

Ahuriri is the most hotly contested ward this time around with five candidates vying for two positions.

With a good number of candidates having put their hats in the ring there’s plenty of choice for voters. In other parts of Hawke’s Bay, some voters had no choice at all with seats being uncontested and incumbents being reappointed unopposed.

Napier’s hopefuls have only a few more days to wait with preliminary results likely on Sunday. Official results will be announced by Thursday 13 October.