Five of Marineland’s remaining mammals left Napier early in the morning of the 10th December bound for new homes in Australia. 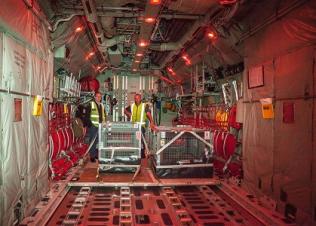 Californian sea lions Dakota and Orion, New Zealand fur seals Iha and Ollie, and sub-Antarctic fur seal Mako were transported from the Marine Parade facility to Hawke’s Bay Airport on Tuesday 9 December where they were met by a New Zealand Airforce Hercules crew.

The Airforce stepped in to help the Napier City Council get the animals to Auckland International Airport, as no commercial flights from Napier were big enough to take the animals’ travelling crates and a road trip would have added several hours to the journey.

A full transport management plan was prepared by Council staff and approved by the Ministry of Primary Industries. Mainfreight was selected to co-ordinate the move because of its substantial experience transporting quarantined animals.

The animals, along with four keepers, flew out of Auckland this morning on Air New Zealand commercial flights.

Iha is going to Melbourne Zoo, Ollie is going to Taronga Zoo, and the other three are headed for Sea World at Surfers’ Paradise. 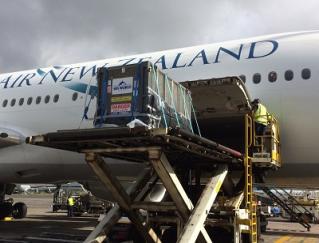 Speaking on behalf of all the keepers, senior keeper Regan Beckett said they were happy the animals were going to quality homes, and that they would be in caring and capable hands. “I don't feel we’re saying goodbye to them, I’m sure we’ll meet again as Australia isn't that far away. We look forward to hearing of how they are after our departure and in the future.”

All the animals, including the last three left at Marineland, fur seals Molly, Mr Bo, short for Mr Bojangles, and Pania, have been under strict quarantine since 1 August 2014. After arrival in Australia they have to go through an Australian quarantine period of 30 days before they can join the zoo populations.

Molly, Mr Bo and Pania are due to leave Marineland in March next year.

Why have all the Marineland animals been in quarantine for more than 120 days?

Only five animals could be transported this time and the timing of the shipment was to suit testing requirements and airline schedules.

Why couldn’t they travel together?

One of the Australian facilities (Melbourne Zoo) did not have the capacity to handle two animals in quarantine at the same time. Sea World is also unable to quarantine more than three animals at a time.

How close can members of the public and media get to the animals?

It’s very important that the animals are not disturbed or unsettled. If quarantine is breached not only will the flights and other arrangements have to be cancelled, but the 120 day quarantine process will have to be restarted.

Where will the remaining animals go, and when?

Molly and Mr Bo are going to Sea World, and Pania to Melbourne Zoo. They are due to leave in March 2015. The delay is due to Sea World having commitments to other animal imports, and Melbourne only being able to quarantine one animal at a time.

Who will transport them?

The same process will be followed.

When the animals are in transit how long do they have to go without water and/or food?

What is the point of quarantine?

As part of the quarantine process blood tests are taken and analysed to ensure unwanted viruses and diseases are not present in the animals. These tests have been done on all eight animals and they are clear.

Each of the animals has been micro chipped to ensure accuracy of testing and information about each animal is appropriately logged.

The microchip allows for positive identification of each animal for AsureQuality auditors who are appointed by the Ministry.

Mike Lintott of Carlyle Vet Clinic Napier has been the lead vet for the Council.

Were there any objections to the animals leaving Marineland?

The proposed movement of the animals was advertised in the NZ Gazette by the Department of Conservation. There were no objections.

What’s going to happen to Marineland when all the animals have gone?

The pools will be emptied and the site tidied soon after the last animal leaves. This will leave the site able to be utilized for what Council decides it wants to use the site for.