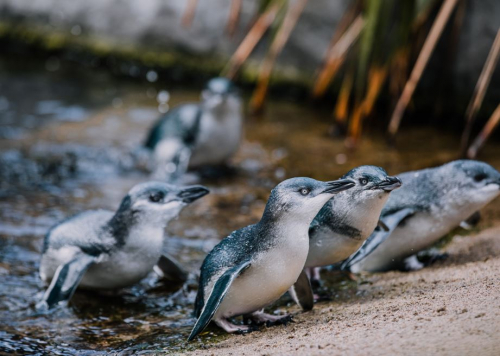 There’ll soon be a flurry of voters around the world flocking to the National Aquarium of New Zealand’s website to vote for this year’s Penguin of the Year.  Local body election campaigning may be underway, however there’s no shortage of feathered candidates when it comes to the National Aquarium’s famous little penguins/kororā.

It is up to the public to vote for their favourite with online polls open from today. With the infamous ‘bad boy’ Mo taking out 2021’s Penguin of the Year after three years as a finalist, this year it could be anyone’s crown to take.

Becs Cuthbert, Supervisor of Birds - and her team at the National Aquarium - has had a busy year with the introduction of a new kororā, as well as the release of two recovered penguins after their rehabilitation.  She says the team is excited with a slight change of format for this year’s voting.

“For the past four years, we’ve had separate voting for the top three finalists.  This year it’s all about getting your votes in early, with a sneak peek at the polls part way through and going straight to the winner announcement,” explains Becs.

“The winner is going to be a hard one to predict this year, everyone has a favourite and we can’t wait to see our followers from around the world get involved.”

In previous years, votes have come in the thousands from countries as far away as Brazil, India, Vietnam, France, England and USA.

Voting opens today with the winner being announced on Wednesday 14 September through National Aquarium of New Zealand social media channels.

The National Aquarium’s social media channels (Facebook, Instagram, Twitter and TikTok) will profile each penguin during the campaign and voters can go to their website to vote for their favourite. People can also book virtual or in-person encounters to get an insight into penguin’s characteristics.

Dora has had a high profile for Penguin of the Month this year. Known as a bit of a princess, she’s been Naughty Penguin of the Month three times in the last year stealing the limelight during keeper talks, having a continued vendetta against the male keepers and wanting to stay in bed all day.  She is popular with visitors as she loves to swim right at the front of the pool to greet them as they arrive.

Martin and Dave like to squabble, and Marina and new arrival Kaewa have made a name for themselves chasing divers and leading other penguins astray.

All of the National Aquarium of New Zealand’s little penguins are there because they need help from specialist staff. They arrived as abandoned chicks, victims of dog attacks and other predators, partially sighted, or have become sick in the wild. Some are missing flippers due to getting caught in fishing nylon.

The National Aquarium’s Penguin Cove facility is a rehabilitation centre for kororā, assisting with recovery of sick or injured birds and returning them to the wild. Some penguins are not strong enough to return to their natural habitats, so they find a permanent home at Penguin Cove. The penguins have lots of space to waddle across their own private beach and then dart through the water as they go about their penguin business.