BikeNZ has announced that Napier has won the rights to hold the Elite & U23 Road National Cycling Championships for three years from 2016. 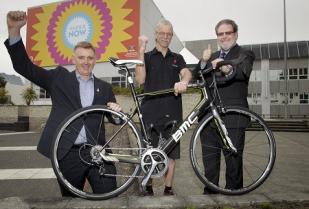 BikeNZ Chief Executive Officer, Andrew Matheson said, “a thorough and transparent process was undertaken to establish the location of this prestigious cycling event, and while it was a very tough decision, the Napier proposal edged out the others.”

“We look forward to partnering with Napier following the 2015 championships in Christchurch, and working together to take this great event to an even higher level.”

“This is a big deal and I think it’s an early Christmas present for the people of Hawke’s Bay. We are committed to bringing more events to Napier and the flow-on benefits are just huge for the whole region.”

Napier City Council Chief Executive Wayne Jack is currently working with BikeNZ on the finer details of how the event will look, but said on the bid put forward by the council provided a ‘point of difference’.

“We basically said to them (BikeNZ) that Napier City Council would back the event with some sponsors already secured, and would put a team of professionals, including Event Director Ivan Aplin, in place to make sure it ran smoothly.  Not only that, we are planning a festival of cycling around the event to ensure the sport is promoted to all ages and abilities.

“Part of the race will see riders going over Napier Hill. It’s not only going to provide a fantastic course for entrants, but also some great vantage point for spectators.”

Mr Jack said not only would the event would inject “millions” into the local economy, it would provide a chance for locals and visitors to see the country’s top athletes up-close and in action.

“I’m looking forward to working with BikeNZ to promote this iconic event and putting cycling and Hawke’s Bay in the spotlight.”

“It’s brilliant, the region will be buzzing. Our climate and surrounds are already a key drawcard for cyclists from near and far. We are seeing more and more people come here specifically for cycling holidays and to make the most of the Hawke’s Bay Trails. Having New Zealand’s premiere national bike event here will help promote that further.”

The event has been held in Christchurch since 2010 and Andrew Matheson also thanked the public of Christchurch for really embracing the event in recent years.