Communities need to constantly reinvent themselves and develop innovative strategies because of the fast changing economic environment. 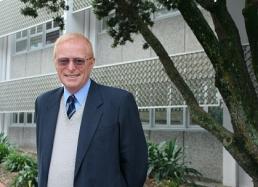 That’s according to Napier City Council Economic Development Manager James Rowe, who says there is no ‘one size fits all’ formula for economic success in his recently released fourth book.

An article written by Mr Rowe in an academic journal sparked the interest of Lambert Academic Publishing, who asked him to compile the book, Understanding the Practice of Local Economic Development: An Alternative Theoretical Framework.

Mr Rowe, who completed a PhD in planning at the University of Auckland, researched the book as part of his PhD thesis.

The essence of the book could be summed up in a couple of sentences, he said.  “Every community is different, there’s no set formula to fix things. You have to come up with unique innovative ideas to promote each community, because everyone has different competitive advantages and each community needs its own framework to support that.”

In the three months since he has been at Napier City Council Mr Rowe has been working with Business Hawke’s Bay, networking with the region’s other economic development managers, and local and national businesses to see what might be done to boost the local economy.

New Zealand is a nation of small businesses, the majority of them micro-businesses, Mr Rowe said. If every small business operator in Hawke’s Bay was able to employ just one extra person each, this region would be the most prosperous in the country, he said. “What we can do for now is try to increase economic development incrementally, one job at a time.”

His third book, Theories of Local Economic Development: Linking Theory to Practice, was published in 2009.

Mr Rowe worked for the Manukau City Council as Senior Planner Economic Development prior to the Auckland “super city” amalgamation. He has also previously worked in Australia, Thailand, Kiribati and the United States.