The National Aquarium of New Zealand has a new addition to its penguin family. 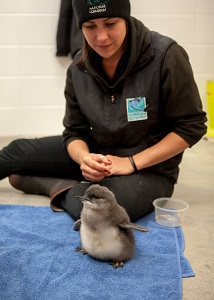 The Department of Conservation recently brought a Little Penguin chick to the Aquarium after it had been rescued from a nest in Ahuriri that had been disturbed. Looking more like a little ball of fluff than a penguin chick with its tiny beak and webbed feet, the chick was, at that stage, aged between five and 10 days old.

Yet to be named, staff have dubbed the penguin ‘Boo’ in the meantime.

Fast forward 10 weeks and the chick, whose sex is yet to be determined, has certainly put on weight – from an initial weight of 98g to 780g - thanks to being fed a steady diet of fish up to four times a day.

The average adult Little Penguin weighs 1kg, and within a few weeks all the chick’s adult feathers will be in place.

Because of Happy Feet the movie many people were surprised to find out that some species of penguins preferred warmer climates to the ice of Antarctica, said senior keeper Rebekah Cuthbert. New Zealand was special in that it had the most species of penguin in the world, she said.

The chick will soon begin taking its first steps towards becoming a part of the Aquarium’s penguin display. It will spend short periods of time in the enclosure until the keepers are sure the birds are used to each other.

It was important they all got along, she said. “They’ve all got personalities really, just like cats and dogs.”