Council lends a hand to build a home

Napier City Council staff, councillors and the Mayor Bill Dalton are volunteering their time for the Habitat for Humanity build which gets underway at 40 Fleming Crescent, Napier, next Monday (24 November). 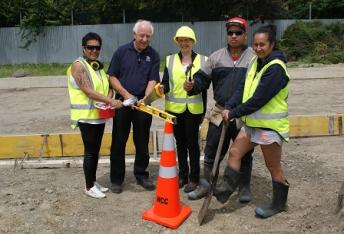 Mayor Dalton, various Councillors, Chief Executive Wayne Jack and other staff will be helping at the site, which was a former Housing New Zealand property, on Wednesday 3 December.  They join crews from other local organisations and businesses willing and able to get stuck into sanding, painting, hammering in nails and whatever else is required to get the property ready for the Kiripatea family to move into on December 13.

The family selected for the four bedroom home via Habitat for Humanity’s Assisted Home Ownership programme – the fourth Habitat for Humanity home in Hawke’s Bay - is Kelly-Jo and Albie Kiripatea, a young local couple with five children aged four to 16.

They are one of more than 600 families throughout the country who have been supported by Habitat for Humanity to work towards home ownership. Families contribute 500 hours of their time towards Habitat projects, and then live in the houses under a rent-then-buy scheme.

Volunteer labour, donated or discounted building materials and reduced loans helped keep a house affordable. Once each house is completed the family can move in under a rent to buy scheme, making regular repayments to Habitat at a no profit basis, at a level they could afford. This method helped families build up a deposit which they could use when seeking independent finance to eventually buy their home from Habitat.

Habitat for Humanity is a global not for profit housing organisation which works in nearly 80 countries in partnership with families in need. The organisation also runs a home repair programme, has social housing available, offers education opportunities and supports Habitat’s international projects.

Locally, it runs ReStore on Eastbourne Street, Hastings, which both accepts and sells second hand goods.

For more information, email or visit the Habitat for Humanity website.