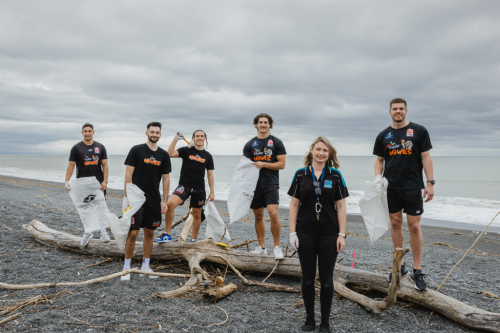 On Friday, 1 April, 121 items of rubbish were collected from a 2000m2 section of Marine Parade beach in just one hour. That’s no joke.

Hawke’s Bay basketball players from the Taylor Hawks traded their basketballs for rubbish bags, as they joined National Aquarium of New Zealand staff in picking up litter as part of the national Litter Intelligence Aotearoa programme.

Litter Intelligence is a nationwide, long-term litter research project led by charitable organisation, Sustainable Coastlines. It sees designated sites 'cleaned up' multiple times a year and all litter found is classified with data then added to a national database.

“It is really important to raise awareness of just how much litter ends up in our oceans,” Karlie says.

“On this occasion we managed to remove several large fishhooks from the beach, along with tangled fishing nylon, fireworks, and a bunch of food packaging plastics such as chocolate bar wrappers, drink bottles and plastic straws.

“Our team does a clean-up of the beach four times a year and we are usually joined by community groups and schools, which is wonderful.”

Taylor Hawks coach and manager, Mick Downer, says as both a club and individuals the Hawks were excited to get behind the Litter Intelligence programme.

“Living in such a beautiful area with so much amazing ocean-side landscape we believe it is a duty of all residents to take seriously the responsibilities of taking care of our own backyard,” Mick says.

So far, 334kgs of litter has been collected from Marine Parade since National Aquarium of New Zealand joined the Litter Intelligence programme. This is thanks to 933 hours donated by volunteers. Hawke’s Bay’s litter volume sits higher than the national average of 399 litter items per 1,000 m2.

“We can’t emphasize enough how important it is for people to dispose of their rubbish appropriately, whether that’s putting it in a rubbish bin provided or taking it home with them to dispose of,” Karlie says.

If you or your organisation would like to take part in the programme please get in contact with the National Aquarium of New Zealand team on 06 8341404.