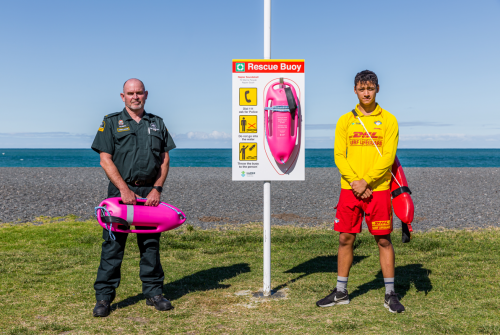 People who witness someone struggling in the Marine Parade surf will be able to provide assistance from the shore with the installation of rescue buoys, from Monday 21 March, along the dangerous stretch of beach.

The buoys are intended for “dry rescues”, which sees the floatation device thrown to the person in the water, enabling them to float whilst awaiting rescue by emergency services.

Napier Mayor Kirsten Wise says every loss of life in the Marine Parade surf is a tragedy and she welcomes the addition of rescue buoys to heighten safety measures.

“Sadly Hawke’s Bay has one of the highest drowning rates in New Zealand, with a number of these being members of the public who attempt rescues,” Mayor Kirsten says.

“We have done a lot of research, looking at statistics and coastal conditions both here and overseas and we believe this type of rescue buoy is best for Napier’s conditions,” Mick says.

Seven rescue buoys will be installed along a 12km stretch of Marine Parade, between the Port of Napier entrance and the Napier Pump Track.

Three buoys will be located indoors at the National Aquarium of New Zealand, Bay Skate and I-Site, while another four will be located along Marine Parade next to Pacific Surf Lifesaving Club, Napier Soundshell, Marine Parade Playground and the Foreshore Reserve Car Park (next to the pump track).

The trial will take place until at least July, during which time SLSNZ will evaluate the public rescue equipment (PRE) through throwing assessments and ease of use in different water environments. This will inform PRE standards across New Zealand.

A Coastal Risk Assessment Report for Marine Parade from SLSNZ, due in May, will also assist in advising additional safety measures to prevent further drownings in the area.

“It’s encouraging to see the Council extending their Safer Napier programme with the public rescue equipment trial and a Coastal Risk Assessment also underway. SLSNZ hopes other Councils will take their lead and implement similar measures, following the tragic summer for drownings across the country.”

Mayor Wise says it will be a community effort to look after the rescue buoys.

“We must ensure the rescue buoys are taken care of and left for those who truly need them in an emergency,” Mayor Wise says.

“The public are encouraged to report anyone damaging or removing the rescue buoys. After all this is life-saving equipment!’”

If anyone finds a rescue buoy or notices one missing they are asked to notify Napier City Council by phoning 06 835 7579.