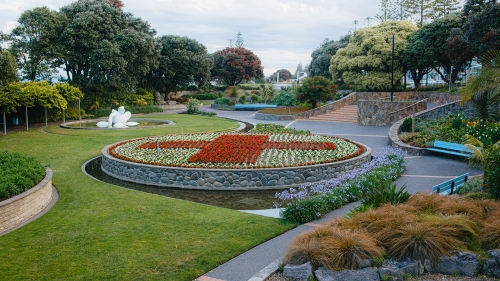 The plantings in Napier’s Sunken Garden.

A flower bed in Napier’s Sunken Gardens is resplendent in red and white begonias, to commemorate this year’s 90th anniversary of the Hawke’s Bay Red Cross Society being formed.

NCC Public Gardens and Nursery Team Leader Shelley Exeter was happy to schedule the planting in to her team’s plan.

“We held off planting the Red Cross emblem until October, as we plan our plantings six months in advance. The begonias will look good until March next year. After that we will remove them and plant something else just as bright and colourful.”

“We have planted our flower beds in particular themes before, such as a fish hook and a yin and yang sign. We thought this one was such a lovely idea,” says Shelley.