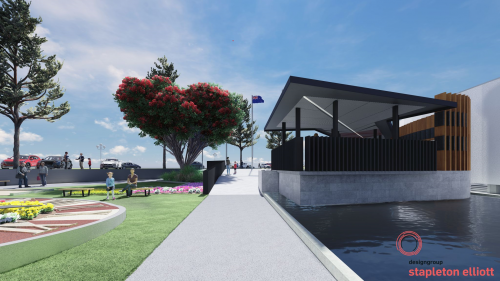 The fences are going up, the garden is coming out and the floral clock is on the move. Behind the newly erected barricade, early work is underway on the restoration of the Napier War Memorial elements.
A ‘ground breaking’ ceremony took place today attended by many who have nurtured the project to restore the War Memorial, over a number of years. Representatives from interest groups including the Napier and Taradale Returned Services Associations were present.
Mayor Kirsten Wise says the project is close to her heart and something she’s personally been involved in for the last five years.
“The memorial holds a special place to a lot of people in Napier. It’s a link to the past for families whose loved ones are honoured here, and it’s a place for us all to reflect on the importance of peace now and into the future.” Mayor Wise said.
From here, the ground will be prepared for the reinstallation of the iconic floral clock. The Roll of Honour will be reinstated and the Perpetual Flame put in place as part of the project, which has many parts to it including the final detailed design and construction phases. The ‘wrap’ that’s been put around the site of the works shows concept drawings for the project. Some elements of the project have already been completed like updating and confirming the names on the Roll of Honour. The project is set to be complete in time for ANZAC Day on 25 April 2023.