From flowers to the Faraday Centre 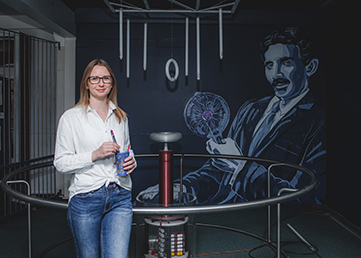 Christie Wright with one of her latest Faraday Centre creations, honouring inventor Nikola Tesla and one of the Faraday’s most popular exhibits, the Tesla Coil.

Faraday Centre Manager Sharyn Philips was on a mission.
Who was the artist who had created the bright, beautiful floral mural in Taradale that had just caught her eye? She had to find out.
Tracking down the artist responsible, Napier based Christie Wright, proved easy enough. It led to her first invitation to add colourful touches to Napier’s interactive museum, said Sharyn.
Over a year later, Christie Wright has become the Faraday Centre’s resident artist.
“Her work really complements what we’ve got. She’s injected some much needed colour into the Faraday Centre and brought new life to the building. Who knows what else we can do? Watch this space!” says Sharyn.
Christie’s recently finished mural depicting inventor Nikola Tesla and a Tesla Coil, one of the Faraday’s most popular exhibits, was sponsored by Hastings based electricity distribution and fibre optic network provider Unison. Resene sponsored the paint for this work.
Christie has now completed five murals inside. She’s about to embark on a sixth depicting Napier’s heritage, beautifying the exterior and leaving no doubt as to what lies inside.
This will also be sponsored by Unison, along with a storyboard covering the history of the site.
Christie says this has been a challenging experience that has developed into a new style she really enjoys.
“Two murals feature my friends who are as passionate about heritage as me. One features my sister and her family. I think adding images of people using the pieces helps visitors, especially young ones, make sense of what they’re seeing. ”
Christie feel it’s an honour to paint Tesla himself, and she hopes her mural will inspire more kids to look him up.
She describes the Faraday as a “treasure” and has enjoyed it so much she has gone from volunteering alongside her painting work, to working as a casual there.
Danny Gough, relationship manager at Unison says, “Unison has a historic connection with The Faraday Centre. The building is 110 years old and was originally owned by the Hawke’s Bay Electric Power Board (Unison) before it was sold to the NZ Defence Force in 1991.”
“We are proud to sponsor this project which brings that historic connection to life and shines a light on the talents of our local artists.”

For more information about this Napier City Council facility, go to https://www.faradaycentre.org.nz/