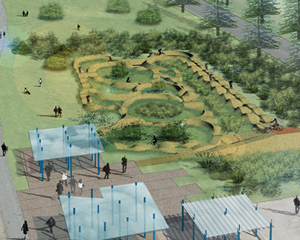 The pump track will be built on Marine Parade, south of the National Aquarium of New Zealand.

A pump track is a circuit of rollers, berms and jumps that loops back on itself allowing the rider to continuously ride it by ‘pumping’ their bikes rather than pedalling.

“We’re delighted to be able to add another activity for the young and young at heart to enjoy in Napier,” said Community Development Manager Antoinette Campbell.

The proposed track, designed by Jeff Carter of Rotorua’s South Star Adventures, is inspired by a pump track in Mendrisio, Switzerland. It will consist of 500 metres of continuous concrete track.

Construction for the track was approved by the Napier City Council City Development committee yesterday (15 October).

Napier Mayor Bill Dalton said the track would create an impressive “gateway” to the city for anyone coming into the city along the coast from the south.

Survey work for the track is underway and work will begin soon. It is hoped the track will be complete by February 2015.

The full-size pump track, estimated to cost $342,000, will cater for a wide range of skills, abilities and ages and will also be able to be used by keen skateboarders and scooter riders.