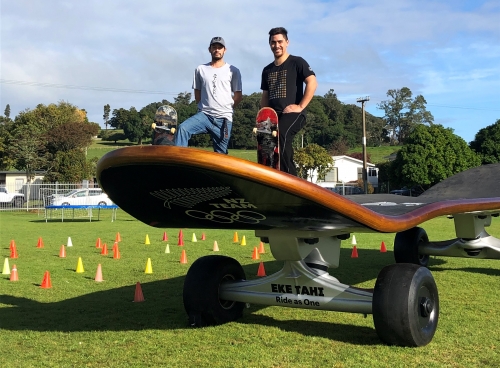 Eke Tahi might just be the biggest skateboard you will ever see – and it’s in Napier this Saturday.

The 12-metre long, 800kg board belonging to the New Zealand Olympic committee has been rolling throughout the country as part of the Great Olympic Skate Roadshow to celebrate the inclusion of the roller sport in this year’s Tokyo Olympics.

Today’s Olympics offers more than just the traditional sports, with surfing and three-on-three basketball joining skateboarding as being a part of the games for the first time. And there’s Kiwis participating in other Olympic level sports too, such as kiteboarding, snowboarding and sport climbing.

Eke Tahi, meaning ‘ride as one’, is a record breaker– beating the last titleholder of the world’s biggest operational skateboard by a metre.

It will be at Bay Skate between 9am and 11am this Saturday, 22 May. It will be accompanied by a range of activities, surfboards to sign with messages of support for our Kiwi athletes in Tokyo – and possibly an Olympian or two will drop by to say hi.

It’s an opportunity to learn more about the Olympics, and show your support for the New Zealand team.

“It’s such a buzz to be asked to host Eke Tahi, and get a little taste of the Olympics at the same time,” says Justin Dwyer, Bay Skate Manager. “We’ve got so many kids enjoying roller sports at our facility now – who knows, this might just be the thing that inspires some of them to take what they love to the next level.”

The roadshow finishes in Auckland next month, with the skateboard taking up residence at The Cloud at the City of Sails waterfront for the final countdown to the Tokyo games in July.