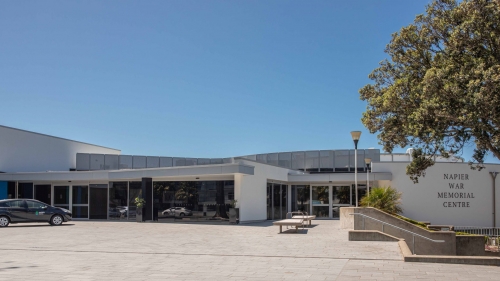 The Napier City Council Future Napier committee approved recommendations to adopt the concept design through to detailed design for the return of the Perpetual Flame, Roll of Honour and remembrance/reflection space at the Napier War Memorial Centre. The committee also extended the scope to include the existing entranceway and its relationship to the memorial to better define the entranceway to the War Memorial Centre.

Once the recommendations have been approved by the Māori committee and the full Council meeting, the concept design, which was shared with the community at a meeting in March, will be advanced to the detailed design stage, ready to support construction.

At the meeting Napier Returned Services Association (RSA) representatives endorsed the process to date and told Councillors the feedback from members was positive, noting that if a finished memorial wasn’t possible by November 11 (Armistice Day), they would settle for ANZAC Day 2022.

Napier Mayor Kirsten Wise was pleased at the progress made so far. “It has been a long journey to this point, but it is important to take the time to get it right.  I would like to thank the community for their patience and also for their input into the restoration of our treasured war memorial elements.”

The committee also approved the recommendations related to the repair and reinstatement of the Napier War Memorial’s original Roll of Honour plaques.

Deputy Mayor Annette Brosnan, thanked the War Memorial Reference Group and Roll of Honour subcommittee for all the hours they had put into the project.

Separate papers will be presented to Council covering the related topics on the Floral Clock, and the War Memorial Centre Management Policy.

Features of the concept design include a curved wall physically connected to the building, displaying the Roll of Honour, Perpetual Flame, a water feature, seating space, remembrance artwork, and landscaping complementing and uniting the building with the Memorial elements.

Architect of the original War Memorial Hall on Marine Parade, the late Guy Natusch, was an advisor to the Reference Group until his passing six months ago.

The Roll of Honour plaques and Perpetual Flame were originally positioned outside the War Memorial Hall, but were later enclosed within a foyer inside the building during its upgrade in 1995.

The heritage architects’ guidance for the restoration project is that it should be based on the original design philosophy of Mr Natusch and include as much of the original fabric of the 1957 design as possible.

As such the concept design is very reminiscent of the original 1954 design and includes both the original Roll of Honour Plaques and Perpetual Flame.

For more information, including a fly-through of the concept design, visit - War Memorial Restoration.