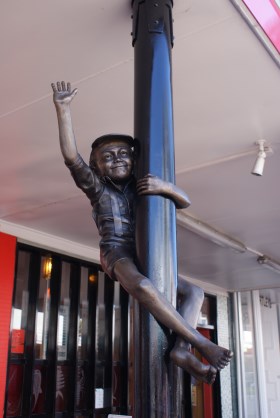 Mr Whyte feels the bronze sculpture of a little boy, who appears to have climbed a pole and is waving, completes his earlier work, a study of Art Deco era local heroine Miss Sheila Williams and her dog Raven, known as A Wave In Time.

The sculpture has stood on Emerson Street since 2010, and Mr Whyte would like both pieces to be known as A Wave In Time.

Mr Whyte said he preferred portraits of actual people as he felt they embodied more life than a made up study and had more presence. Sailor was quite reluctant to be the model for the sculpture in the beginning, he said. “His mum and aunty convinced him it would be okay and that he wouldn't have to stand anywhere for years at a time without moving.”

Goldfield Stone, the stone company he runs with business partner Robin Ayers, is very busy currently, due to restoration work required in the aftermath of the Canterbury earthquakes, and the 100th anniversary of WWI as they are engaged in the restoration of several memorials in the garden city, and the Maori WWI memorial at Pakaitore in Whanganui.