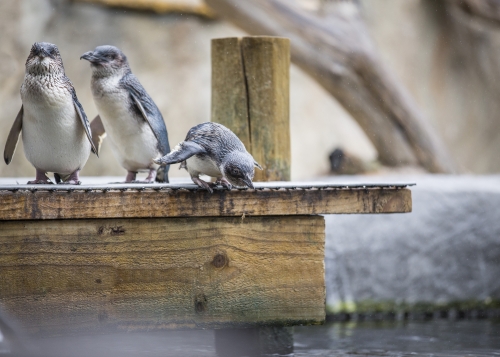 This year Burny, Captain and Mo will be battling it out for the prestigious title of Penguin of the Year 2020 at the National Aquarium of New Zealand.

A record 9,000 votes were cast in the first round of this year’s competition, with international interest high even before voting began.

While most of the votes cast in the first 24 hours came from New Zealand, the United States, United Kingdom and Australia, people from many different countries had their say, including Brazil, Canada, Mexico, Israel, Vietnam, France, Spain, Russia, Norway, Malta and India.

So what happens next? Voting for Penguin of the Year runs from today until 10pm Tuesday 13 October, with the winner being announced on Thursday 15 October.

To vote for your favourite, go to www.nationalaquarium.co.nz, where you can also learn more about the finalists and what makes each of them unique.

Some of the comments on the voting forms have been amazing to read. Here’s some examples:

“All the way from the little island in the Mediterranean. I love your page and your penguins. Hoping to visit one day!” - Malta

“I love reading about your penguins! Keep up the amazing work!” – United States Of America

“Thank you for sharing their stores, brightens my day during lockdown” – Australia

“They are all so wonderful, but Timmy is my guy! Thank you for being such a bright spot in a grim year, National Aquarium team!” – United States Of America

“They’re all winners to me! Love the work you do. Penguin of the month is my happiest day of the month every time.” – New Zealand

Burny was brought to the National Aquarium with the soles of her feet burnt from a fire on the beach not being extinguished properly. She’s picked up on some of Mo’s bad habits pecking others in the face during feeding time, stealing Mo’s fish, and abandoning her egg in her friend Draco’s burrow. She’s three years old, and her boyfriend is Martin (who she ditched recently to spend more time with the girls!).

Captain is one of our nicest penguins and is a real gentleman. He lost his right eye in an altercation with another sea bird and must be fed from his left side. He and Flip are together and share a burrow. He is a good dad to Dave and is punctual when it comes to feeding times - eats first and leaves first. His home renovation efforts were recently commended in our Penguin of the Month.

For the last 2 years, Mo has been a finalist for Penguin of the Year. Will this be his year?  He’s our naughtiest penguin (appearing on the list more than any other penguin). The name and shame seems to have worked and although still naughty, his behaviour has improved. His girlfriend Betty tries to keep him on the straight and narrow.  His previous antics include hoarding nesting materials, stealing fish from other penguins (he stole 9 fish in one go in March when he made the Naughty Penguin of the Month) and can be lazy. Mo is eight years old and was abandoned as a chick.

All of the Little Penguins are at the National Aquarium of New Zealand because they need help from their specialist staff. They arrived as abandoned chicks, have been injured in dog attacks, are partially sighted, or have become sick in the wild. Some are missing flippers due to getting caught in fishing nylon.