Be an ‘eggsplorer’ at the National Aquarium of New Zealand 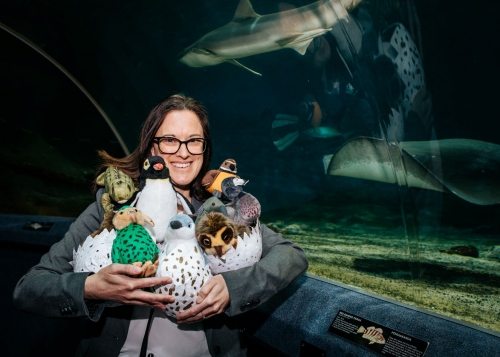 Nine cuddly native animals will be hiding and waiting to be found during the school holiday Spring “Eggsplorer” competition at the National Aquarium of New Zealand. The soft toy versions of some of our most popular native birds will be snugly sitting in papier-mâché eggs in and around the Aquarium’s exhibits. A soft toy tuatara will also be waiting to be found. Visitors who spot them all will go in the draw to win one of the cute hatchling toys, plus other prizes including a basket loaded with delicious Whittaker’s goodies and a Friends of the Aquarium 12-month membership.

“Eggsplorers will discover fascinating facts about New Zealand’s unique native birds and reptiles and how we can all help to look after them,” says National Aquarium of New Zealand Education Manager, Amy Stevens.

“As well as being lots of fun, our school holiday activities always have animal conservation and education as their purpose.”

“In hunting for the hidden hatchlings, our visitors will learn a lot about our native birds, including brown kiwi and our captive breeding programme for kiwi. Visitors will also learn about the advocacy and conservation work being done with our wild populations of native birds, particularly around protection from predators,” says Amy.

Entry in the competition is included as part of a general admission ticket from Saturday 26 September to Sunday 11 October.

There are still a few places left in the National Aquarium’s school holiday programme. Visit www.nationalaquarium.co.nz to make a booking.