The National Aquarium of New Zealand’s latest many-legged addition has a new name. 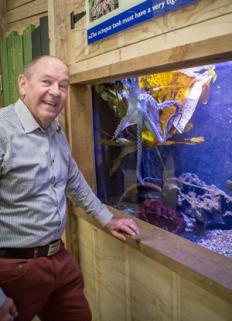 Gerry Townsend, the winner of the “name the octopus” competition organised by the Napier City Council, met Inky the octopus for the first time today (Friday 29 August 2014).

Mr Townsend’s suggestion – one of more than 100 entries – was voted the favourite of all the entries by aquarium staff. e choHee He chose a Close Encounter with the Penguins as his prize, which he intends to share with his grandchildren.

A keen salt and freshwater fisherman, and diver, Mr Townsend had seen plenty of octopuses in action in their natural environment.

Now semi-retired and working part-time as a science technician at Lindisfarne College, Mr Townsend has long had an affinity for nature. The son of a zoologist turned lecturer, he spent a lot of time on Little Barrier Island as a child, helping his father and his father’s students with various conservation duties, including tagging petrels and kiwis.

Inky was brought to the facility by an aquarium volunteer who discovered the octopus while out fishing at the Pania Reef, said Kerry Hewitt, the curator of exhibits.

Octopuses are carnivores and, in the wild, like to set traps for their prey. Inky won’t have to worry about that part, however, as he will be hand fed fish three times a week.

They are regarded as the most intelligent of all the marine invertebrates, Mr Hewitt said. Inky’s predecessor lived in a tank without a lid and, without fail, every feeding day he would be sitting on top of his tank waiting for his dinner.

Inky likes people watching as much as people like watching him. In time staff will introduce games and toys to keep him busy. “He’s got a few battle scars and a couple of shortened limbs which will eventually grow back, but he’s getting used to being at the aquarium now. We have to keep Inky amused or he will get bored.”