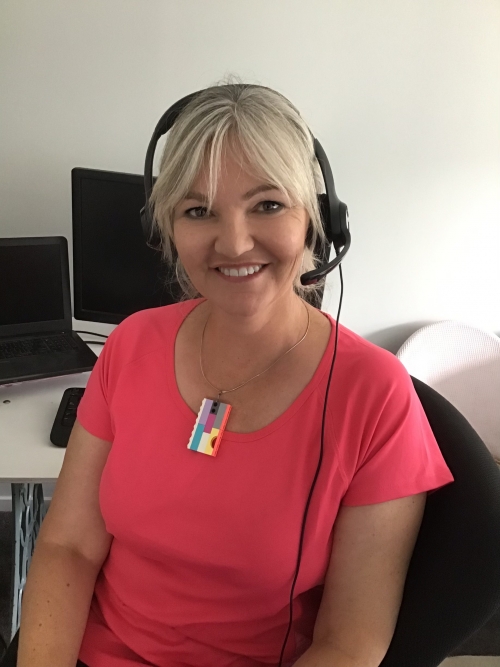 Sharyn Phillips, usually the Faraday Centre Manager, who is leading the team carrying out welfare checks by phone in Napier.

Napier City Council staff are making calls to people over 70 in the Napier community to make sure their needs are being met during the Level 4 lockdown.

Up to 20 staff who have been redeployed for this work, and three Councillors, are involved in the welfare checks, which began mid-last week. Almost 1000 phone calls have been completed to date, out of 3500 names and information supplied by the Ministry of Social Development. The remainder are expected to be completed in the next week or so.

Many people are happily independent and comfortable in their own bubbles, but some do require follow up calls and in a couple of cases so far, further assistance, says Sharyn Phillips, Faraday Centre Manager turned team leader of the Napier call staff.

Some people say they don’t want to be a burden to anyone, or they’re too worried or unable to go out for essential services, she says. The relief they feel when someone calls, particularly from those who live alone, even if they are doing ok and are happy just to have a chat, is clear.

“One lady had run out of food and didn’t want to tell her granddaughter who was coming every night to drop off dinner for her. We arranged for a welfare package, and she told us when we did a follow up call, it was like Christmas. She also had an injury and her daughter was able to take her to the doctor yesterday to have it seen to.”

She was one of four people whose details were passed on to get assistance with food parcels over the Easter break.

Another woman was seriously ill and after speaking with a team member who organised a nurse to ring her, and later to Sharyn, who advised her to activate her medical alarm, she was taken by St John Ambulance to hospital, where she was recovering.

The calls do take a lot of time but it is worth it when you are able to help people who would otherwise have fallen through the gaps, says Natasha Mackie, Napier Incident Management Team Welfare Manager, usually Manager Community Strategies for NCC.

It is likely this group will still need support after the lockdown, particularly if over 70s are still advised to stay home.

Welfare checks for seniors living alone in Hastings, Wairoa and Central Hawke’s Bay have also either been done or are underway.