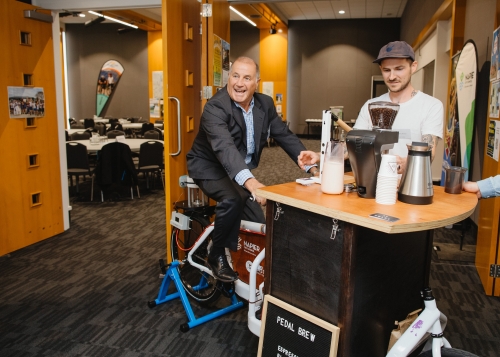 What is between “A and B” is just as important as the destination, says international walking advocate Rodney Tolley.

Dr Tolley was one of the speakers at Friday’s inaugural Hawke’s Bay Walking & Cycling Summit, held in Napier. He regards walking as one of the best forms of transport, good for the body and good for the environment.

The summit was attended by 100 people, including council and District Health Board representatives, councillors, students, iwi and local transport consultants.

Associate Transport Minister and keynote speaker Julie Anne Genter spoke via Skype on a range of topics, including the Government’s Road to Zero Strategy.

Dr Tolley described public spaces as an asset for cities, but that too often people the world over seemed to be sticking to a manual called “planning cities like people don’t matter”. “What’s between A and B is just as important as getting from A to B… we need to slow people down, make places active and interesting,” he said.

Drawing on decades of research, Dr Tolley urged people to remember that the more vehicles there were, the less appealing an environment was. Retailers also benefited too, he added, with people on foot spending more than motorists. “People say they want more walking and cycling but aren’t prepared to give up parking.”

Dr Tolley is considered an international expert on green transport issues. An Honorary Research Fellow at Staffordshire University in the UK, he is the Conference Director of Walk21, a global partnership of walking experts that champions the development of healthy, sustainable and equitable communities where people choose to walk.

The summit was a great opportunity for people to learn from the experts on the real value of investing in walking and cycling for our communities.