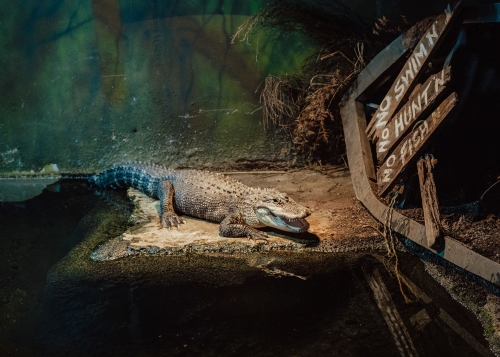 PHOTO CAPTION: Cheryl the American Alligator in her enclosure at the National Aquarium of New Zealand

The National Aquarium of New Zealand will be saying ‘see ya later’ to Cheryl the American Alligator on Thursday 5 March after her 9-year stay in Napier.

Cheryl was loaned to the Aquarium by Butterfly Creek in Auckland back in 2011.

“But she was so popular that her time with us was extended. After being a much-loved resident at the Aquarium, Cheryl is now heading home to her beautiful new enclosure and original family at Butterfly Creek.”

Long or short term loans of animals between zoos and aquariums is common. It creates opportunities for changes in exhibits, supports new educational messages, creates interest for visitors, allows keepers to learn new skills and enables animals to be a part of breeding programmes.  The lifespan of American Alligators in captivity can be 65-80 years. Planning to take on an animal for its full life is a serious responsibility, so these loans allow a chance for an institution to have a species for a shorter period if they otherwise couldn’t make a longer commitment.

“Cheryl’s enclosure at the Aquarium will be opened up to give our large population of terrapins more space while we consider options for this exhibit,” says Rachel.

“Should the planned expansion of the National Aquarium go ahead, exotic species such as American Alligators will not be a feature. Instead, the focus will be on native species, with an emphasis on education and ocean conservation. So any future plans for this exhibit space will likely be to house native species.”

Cheryl’s move to Auckland will be overseen by the Ministry for Primary Industries.

Be sure to head along to the National Aquarium of New Zealand before 5 March to say goodbye to Cheryl!