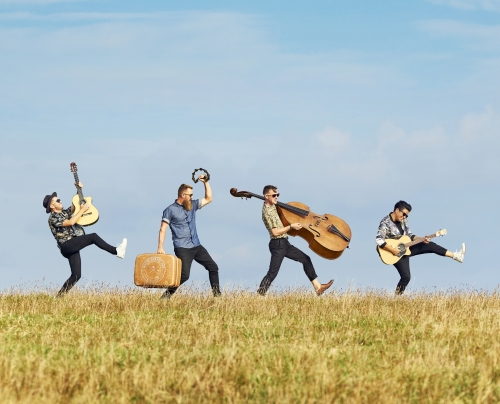 We are on the countdown to 2020 and one of the best places to see in the New Year is going to be at the Soundshell, on Napier’s Marine Parade.

White Chapel Jak, one of the most popular bands to play at Napier events in recent times, is the headline act for this free family friendly community event.

Once again there will be two massive fireworks displays, one at 9.45pm, and one at midnight, shortly after Napier Mayor Kirsten Wise rings the Veronica Bell, and the countdown begins to another year.

“We are incredibly lucky to have secured White Chapel Jak, one of New Zealand’s top covers bands. It’s a great opportunity to showcase both local and New Zealand talent all on one stage, and for the people of Napier while we welcome in the new year,” says event organizer Beth Elstone of Littlestone Entertainment.

It will be something of a homecoming for two of the band members, former local lads, guitarist Nathan Boston, originally from Taradale, and drummer/percussionist Dean Tinning, from Hastings.

Auckland based Nathan, Dean, plus band mates, vocalist Bonnie Hurunui and double bassist Michael White, are stoked to be coming back to the Bay, especially Nathan. He’s stoked to be able to tick “performing at the Soundshell” off his wishlist – and on one of the biggest nights of the year in town.

Each of the band members bring something special to the musical mix, showing their earlier experience and influences, from jazz to classical.

So what can we expect from this fun band who were so popular at Toasted! earlier this year and in 2018? A bit of funk, definitely some classics from the 70s to the 90s – perhaps even a touch of hip hop and a couple of top 40 hits. “We tend not to pre-plan sets. We’ll play a couple of songs then figure out what’s working. But you can expect some pretty long and hearty medleys,” says Nathan.

While the entertainment takes place, there will also be a gold coin collection by and for the Napier Cadet Forces.

This event is proudly presented by Napier City Council, Smokefree and Littlestone Entertainment. Patrons are reminded there is a liquor ban in place in the CBD, and no fires are to be lit on the beach.

The event will go ahead, rain or shine unless it is deemed unsafe due to weather conditions.

For updates, go to: www.facebook.com/nyenapier/