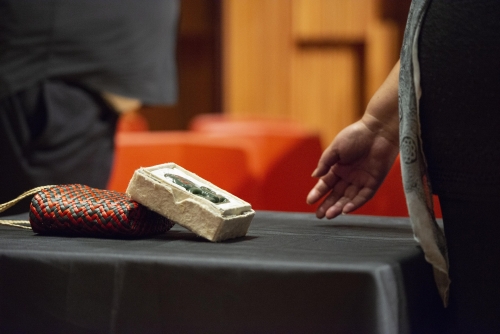 It is an important exhibition – sharing local and national stories from a Māori perspective – and a rare chance to view items not often on display.

With one significant exception, all the exhibition items, such as oil paintings, historic photographs, documents, pounamu, carving, clothing and cloaks, have been sourced from MTG’s collections.

This object of particular significance to Ngāti Kahungunu is the hei tiki Te Arawhiti, which originally belonged to Kahungunu, the ancestor which all iwi descendants whakapapa to.

It is approximately 700 years old and usually resides at Whanganui Regional Museum. How it came to be on the other side of the North Island is a story in itself, says Te Hira Henderson, Curator Māori at MTG.

Given that the information used for Rongonui is drawn from a number of published, and oral sources, he also expects to hear from people who have different tales to tell about the taonga. “Whenever anyone has created an exhibition like this, they tend to rely on written sources. There will be different versions of these stories, and sometimes there are elements of truth to these other versions. I hope people will share their stories about the taonga with me, and that way we can add more to what we know about the history of these objects,” he says.

He is also planning exhibition talks for early next year.

The museum has a close and collaborative relationship with Ngāti Kahungunu and it’s important to us that iwi voices are heard in exhibitions such as this, says Laura Vodanovich, MTG Director. “Rongonui sits alongside other collaborative work, for example with artist collective Iwitoi Kahungunu, our Raranga Matihiko digital education programme, and the recent award-winning exhibition Bottled Ocean 2118 with artist George Nuku, among other joint programmes.