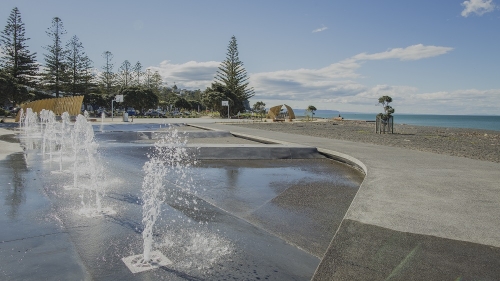 Successfully bringing together a series of spaces along Napier’s waterfront has resulted in Marine Parade winning an Award of Excellence at the Resene New Zealand Institute of Landscape Architecture (NZILA) Awards.

The well-deserved award, announced on Friday 8th November, was presented to planning and design consultancy Boffa Miskell, who designed the Marine Parade and entered the project in the Awards.

The Award judges noted that “this well-crafted entry exemplifies excellence in integrated design, bringing together people and place.”

The revitalised section of Marine Parade foreshore opened to the public in August 2017 with a Family Fun Day.

Prior to the revitalisation, there was a carpark, screened off from the sea by a two-metre high hedge. Now it has become one of Napier’s most celebrated coastal public spaces offering water play, sheltered seating areas, a basketball court, street skating features, water features and stories of our Maori heritage.

“The redevelopment has given new life to the Marine Parade, which is now more popular than ever with locals and visitors,” says Napier City Council Director of Community Services Antoinette Campbell.

“We are so pleased that the project has been recognised with this award by the Institute of Landscape Architecture.”

Nik Kneale, Senior Principal Landscape Architect, Boffa Miskell, says “We’re thrilled to have been recognised by the NZILA for our work on Marine Parade’s coastal park. Designing the project with the wider team, including Paris Magdalinos Architects and Jacob Scott, has been a pleasure, sharing stories of place and delivering a new, yet familiar aesthetic for central Napier. On top of this, the community’s enthusiastic adoption of the coastal park has been incredible. We’re both proud and honoured.”

The NZILA Awards raises the profile of the landscape architecture profession - providing members and the Institute an opportunity to celebrate and reward excellence.