Santa is coming to the Harcourts Christmas Parade 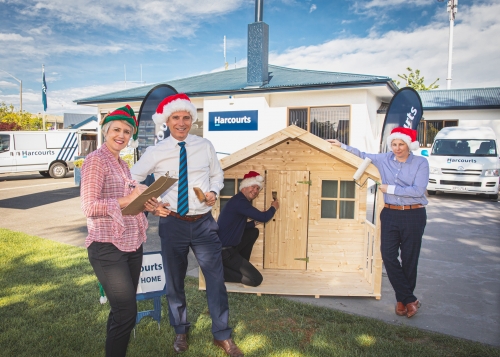 Santa is once again going to be the special guest at the Harcourts Christmas Parade, on Sunday 1 December.

Harcourts is the brand new naming sponsor for the Christmas Parade. “We’re very proud to be involved in such a wonderful community event. I know it brings a lot of happiness to families, and the whole Harcourts team is excited to get behind the event,” says Harcourts Hawke’s Bay Managing Director Kaine Wilson.

Harcourts will have a “mini Harcourts house” in the Parade. This will be auctioned off at the Christmas Fiesta at 2pm. Proceeds from the auction will go to the Harcourts Foundation, which helps different charities within Hawke’s Bay.

The Parade is a collaborative effort. Along with Harcourts, other supporters are Napier City Council, NZME, The Hits Hawke’s Bay, Mitre 10 MEGA Napier & Hastings, and Napier City Business Inc who will add to the vibrancy of the Parade and Fiesta with activities on the day.

Nearly 50 organisations will be celebrating Christmas in the Parade, showcasing to the community what Christmas means to them. Of course, Santa will feature proudly at the end of the Parade procession. “There will be a huge variety of floats and entertainment this year,” says Napier City Council Marketing Manager Rebecca Ainsworth. “Along with pipe bands and marching girls, there will be a variety of street entertainers, including some things that people would have not seen before in a Napier parade.”

“One thing really stands out every year for me – the obvious delight it brings to all the children. That’s why Napier City Council chooses to put this event on every year,” says Rebecca.

“I encourage people to arrive early for a great viewing spot. Tennyson Street is an ideal place to view as it’s a much wider street with more space.”

NCC is also participating in other ways. While Santa is in town he “borrows’ a sleigh designed and constructed by MTG Hawke’s Bay and Council depot staff, and first used in the parade in 2015.

The MTG will be showing the movie Polar Express at the MTG Century Theatre at 10.30am ahead of the parade start at 1pm. This is a free family event  - the MTG’s Christmas gift to the community.  It will be on a ‘first come, first served basis’ with doors opening at 10.15am. There will also be Christmas craft activities in the MTG Drop-In Zone.

After the Parade, the Christmas Fiesta will extend from Lower Emerson Street into Clive Square where there will be a range of activities and entertainment, and offers a great chance to visit Santa’s grotto for a photo with the man himself.