A year of awards, events and water works for Napier City Council 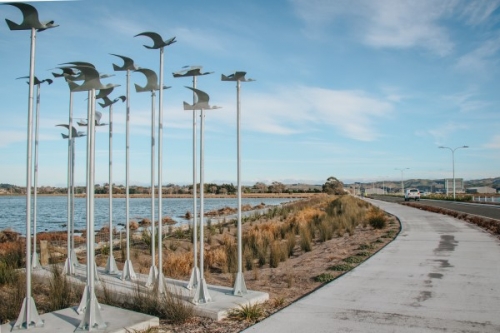 At the final meeting of the current Napier City Council today, the 2018/19 Annual Report was adopted.

“The past year has brought challenges but also many highlights and positive developments. It is pleasing to see Council is in good financial health, with operating income exceeding expenditure” says Acting Mayor Faye White.

“We are proud that Napier’s average residential rates remain one of the lowest in the country at $2,118 per property.”

In October 2018 Anderson Park Playground was named as the winner of the NZ Recreation Association (NZRA) Outstanding Park Award and it received a highly commended at the recent Local Government Excellence Awards.

Most recently, in conjunction with the NZ Transport Association and WSP Opus, NCC was awarded a best practice award at the NZPI Conference for the Watchman Road intersection project.

Improving the city’s water network has been a big focus during the year and recently Council confirmed that water is its number one priority.

“Water was our biggest challenge, with a number of key projects brought forward to help address dirty water that is being experienced by parts of the community. We are mindful that it will take time to bring a complete resolution to the situation,” says Faye White.

Over the course of the last year Council has delivered water bore improvements, reservoir improvements, had our bores classified as secured, met the compliance with the new drinking water standards, and the Council’s updated Water Safety Plan has been signed off by the drinking water assessor during the year.

Signature events have been a positive feature this year in the city. Events are not only a drawcard for visitors but provide many opportunities for locals too. NCC sponsored the outdoor and street events of the hugely popular Art Deco Festival in February.  Council also hosted Nitro Circus, ICC Cricket ODI matches, the Air New Zealand Hawke’s Bay International Marathon, the Elite Road National Cycling Championships and Iron Māori.

One of Council’s most successful projects was the re-turfing of McLean Park. This project included new stormwater mains and drains being laid, and then 130 truckloads of hybrid turf was laid down. Nitro Circus was the first non-sporting event to be held on the new turf.  This event sold more tickets per capita than any other Nitro Circus show of the Australian and New Zealand tour.

“The past year has been a very busy one and I thank the many people and organisations who got involved with our consultations and shared their views and ideas. Your contribution helps to make Napier the special place it is,” says Faye White.

“I would also like to acknowledge the hard work, passion and dedication Mayor Dalton has shown to our city and wish him well with his ongoing recovery.”