Madsen's Medal - A night of nerves for Mum 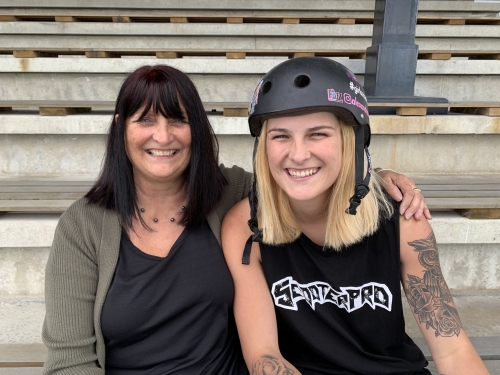 More than 4,000 competitors from 81 countries took part at the 2019 World Roller Games in Barcelona. Twenty-one-year-old Napier scooter sensation, Alexandra Madsen, finished second in the first ever women’s world scooter championships. She put in two superb preliminary runs to get through to the 7 July final as top qualifier, only to be narrowly pipped for the title by US rider Rebeca Ortiz. For her mum, Sandy, it was the proudest, tensest night of her life.

The final was set down for just after 5am New Zealand time. Sandy Madsen had told her friends she wouldn’t watch. “I can’t bear it,” she says. “I get so nervous and anxious... my stomach keeps turning. It’s too nerve-wracking for Mum...” No, Sandy decided, she would sit this one out. She wouldn’t watch.

She sets the alarm.

She was worried she might sleep through it, but sleep never came near. She got up, had a hot drink. She went back to bed. She tried to think about everything else: she tried not to think about anything at all – but all she could think about was her daughter, flaxen hair stuffed beneath a helmet, soaring through the air. The night before Alexandra Madsen had put in two astonishing runs to make it through to the pro women’s scooter world championship final.

She’d aced it: she’d finished ahead of the American trio that many picked to sweep the medals. She outscooted Australian wunderkid Bianca Dilworth who, just a couple of months earlier, had beaten her at the Australasian Champs. The Brits, the French, the Spanish: Madsen beat them all. The 21-year-old from Napier was the top qualifier. On top of the world.

Now Alex just had to hold her nerve, find her rhythm, land her jumps. And now her mum just had to get some sleep.

Only she’s not going to – not tonight, no way. The hours skulk by and now Sandy looks at her phone. Quarter to five. She gets up, makes a cup of coffee, sets herself up in the lounge. It’s become a bit of an Alex shrine – all the medals, the trophies, the certificates.

It’s just the two of them here: it’s how it’s always been. Mother and daughter have talked about this day – this moment – for a decade, maybe more. “She told me she was going to win,” Sandy remembers. “When she was nine or 10 she told me that one day she would be New Zealand champ. She did that. Then she said she’d win the Australasian champs – she won that in 2017. And then she told me she was going to be world champion. She’s very determined.

“She’s fought all the way to get where she is,” Sandy adds. “As a girl coming up through the ranks it’s not easy. It was hard out there with the boys – she’s had to fight for recognition. She’s basically had to go out and whip their arses.”

Which she’s done – whipped them often, whipped them well. She’s just kept going, just kept pushing through. Sandy again: “She’s had some really bad falls, some bad injuries, but she never gives up. She’s a tough cookie. A tough Kiwi.”

Dedication. Focus. Grit. That’s what got her here. That, and a decent amount of natural talent. Strength. Balance. Agility. Watch the top riders, Sandy says, and you’ll be blown away. “It’s gymnastics on wheels.”

But there’s something else, something quite intangible – something only the very best riders have. A connection to their machine.

“Her scooter is part of her,” Sandy explains. “They’re one unit.

“It’s always with her. It lives in the lounge. I try to move it to the garage from time to time, but it always finds its way back inside.”

Sandy Madsen: “She’s fought all the way to get where she is. As a girl coming up through the ranks it’s not easy. It was hard out there with the boys – she’s had to fight for recognition. She’s basically had to go out and whip their arses.”

Now Sandy Madsen checks her phone again. It’s nearly 5am. She opens her laptop, logs in to the livestream.

Over in Spain – on the exact opposite side of the world – Alex Madsen prepares for her run. Afterwards people will ask her how she felt and suppose she must’ve been nervous, anxious, even a little overawed? After all, this was her first time in Europe, in fact her first time past Australia. Barcelona is a long way off for a girl from Nelson Crescent.

Alex has always been mentally strong – tungsten tough – but her mum had noticed the nerves. Alex hadn’t planned this. She hadn’t reckoned on being top dog – her scintillating prelim runs had netted her 84 points, comfortably ahead of US star Rebeca Ortiz on 80.80 with Australian nemesis Bianca Dilworth well back, fifth, on 73.60. Now she was the one they were all chasing.

It’s lonely out front. Alex was the outsider, the Kiwi, the only Fuzion rider to make it through. And as she waited at the top of the ramp to start, her mum could see her shaking.

“Oh, my girl... my baby.” She just wanted to be there, put an arm around her daughter, give her a hug, a squeeze and tell it’s going to be okay, she can do this, she’s got this. Instead she implores her computer: “C’mon, Alex. You can do it, girl. Just breathe. Don’t stress. Breathe.”

Sandy: “The nerves were causing her to shake all through her finals making it difficult at times to control her tricks.” She had a bad stack at the end of her first run. There are six riding in the finals and Alex is wobbling, sliding out of the medals.

She glides through the second half, totally nails the last stack. She’s fought her way back – but from too far back. The American Rebeca Ortiz gets the gold with 78.60 points, Alex second with 77.20. Silver.

When Sandy talks to Alex, they’ll talk about the nerves, the pressure, the small details that meant she didn’t quite bring her prelim form to the final run. But she gave it everything. She battled back and she finished strong. She’s second in the world. You’ll take that every time.