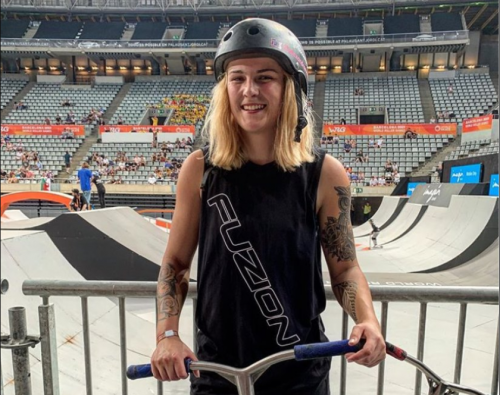 More than 4,000 competitors from 81 countries took part at the 2019 edition of the games in Barcelona. Madsen was part of a 15-strong field competing in the first ever women’s world scooter championships. She put in two superb preliminary runs to get through to the 7 July final as top qualifier, only to be narrowly pipped for the title by US rider Rebeca Ortiz.

The scooter class, sometimes likened to “gymnastics on wheels”, is one of the fastest growing sports in the world. What makes Madsen’s silver medal even more impressive is her lack of international experience. This was the first time she had competed outside Australasia.

“She’s had to overcome so many obstacles,” says Bay Skate manager, Justin Dwyer. “She’s a girl. It’s such a male-dominated sport, especially here in New Zealand. She’s got no real peers here – it’s basically her against the boys.”

“She’s fought all the way to get where she is,” adds Sandy Madsen, a self-described “very proud mum”.

“As a girl coming up through the ranks, it’s never been easy for her. It was hard out there with the boys – she’s had to fight for recognition. She’s basically had to go out and whip their arses.”

“She’s had some really bad falls, some major injuries, but she never gives up. She’s a tough cookie. A tough Kiwi.

“It’s a stunning result,” says Napier’s Acting Mayor, Faye White. “People don’t realise how big the sport of scootering has become. To be second best out of literally millions of competitors and enthusiasts across the world is a remarkable feat.”

To recognise Madsen’s achievement, the city will hold a parade along Emerson Street on Tuesday 16 July. The parade – on scooter of course – will leave Clive Square at 12pm, head up Emerson St towards the Soundshell, then continue down to Bay Skate. A celebratory free barbecue for friends, fans and supporters will take place at 1pm.