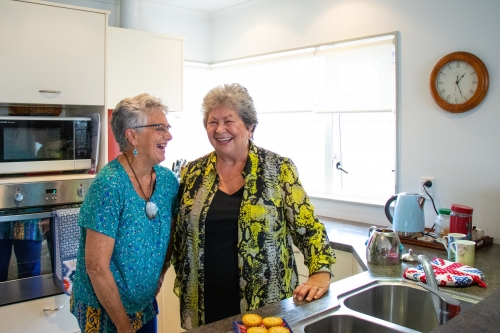 Napier is a step closer to having its first Positive Ageing Strategy.

The draft strategy, which covers the years 2019-23, considers the growing ageing population and the anticipated impacts this will have on Napier. Consultation is expected to begin later next month.

The strategy development has been aided by various groups, including Napier Grey Power and Kiwi Seniors. Bruce Carnegie and Jill Fitzmaurice, representing these organisations, both spoke in support of the strategy at the public forum at the start of the meeting.

Housing, health and the fact older people are expected to comprise more than a quarter of the city’s population in 20 years’ time, possibly earlier, are things to be mindful of, said Bruce. Jill, a member of the Positive Ageing Strategy Reference Group, stated change is inevitable, and as an aging person had an insight into the positive and negative issues. “Older generations are an untapped resource.”

Population ageing is a social change affecting many parts of the world, including Napier. Just over 10,000 people aged 65-plus live in Napier, of which 550 identify as Māori. Older residents make up 19% of our population, higher than the national average of 14%. In 20 years' time, possibly earlier, older people are expected to comprise just over a quarter of the city’s population.

NCC's Natasha Mackie: “The strategy focuses on all facets of life and recognises Seniors have a huge range of interests, experience and skills, and make a valuable contribution to our community."

The draft strategy focuses on city-wide priorities to support seniors in Napier to live well. Recent data shows over half of residents aged 65-plus live with a disability, so linkages to Council’s recently drafted Napier Disability Strategy is important.

“The strategy focuses on all facets of life and recognises that Seniors have a huge range of interests, experience and skills, and make a valuable contribution to our community,” says Natasha Mackie, Manager Community Strategies.

It is important for Council and other agencies to plan for this future through a city-wide strategy that supports Napier’s seniors to live well, now and in the future.

The strategy has been developed in collaboration with, and advice from a Steering Group comprising representatives from agencies and providers who offer services to older people in Napier. It also has input from a Reference Group of residents with a lived experience of ageing.

The strategy has also been informed by seniors and other organisations/groups through a range of forums, including workshops, hui, presentations at meetings, discussion groups, and a survey distributed through multiple channels.

The strategy aligns with the NZ Positive Ageing Strategy and can be adapted to align with the internationally recognised Age Friendly Cities model once it is embedded.

Council expects to have an draft implementation plan for the strategy in place by the end of the year.