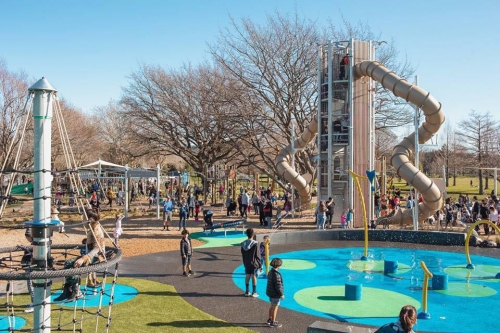 The awards, now in their sixth year, recognise and celebrate the key leadership role local government plays within communities around the country.

Napier City Council is a finalist in the EXCELLENCE Award for Social Well-being for the new playground that caters to all abilities and all ages, featuring New Zealand’s tallest playground tower, a wheelchair accessible mini-tower, climbing and swing structures, water play, functional artwork and interactive elements.

The award criteria is for a project that enhances the social well-being of its community, demonstrating strong community involvement  and improved integration of information, service delivery and processes to ensure the organisation is responsive, and citizen-centric.

Judges praised the project as “the first all-abilities playground of such a size in the region”.

LGNZ President Dave Cull said being named as a finalist is a significant achievement and reflects strong leadership and the innovative work being delivered by councils across the country.

“The sector should be incredibly proud of its achievements as we celebrate these outstanding projects. The finalist projects are real examples of how local government delivers exemplary value and services to New Zealanders in a collaborative and inclusive way.”

Category winners will be announced at a gala dinner during the LGNZ Conference, to be held in Wellington on 8 July 2019.

Anderson Park - and its rivals

The four finalists for the LGNZ EXCELLENCE Awards for Social Well-being are: