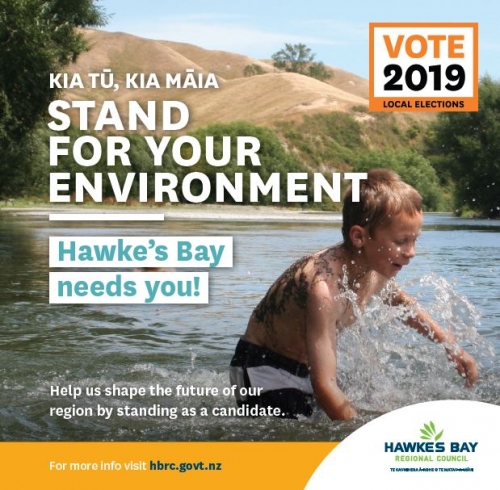 What will it take to make young people turn out to vote – or even stand - in the upcoming local body elections?

The Electoral Officers for Hawke’s Bay’s five Councils and Hawke’s Bay District Health Board (HBDHB) are working together to promote enrolling, and voting, and new candidates to stand for the 2019 local body and District Health Board elections on 12 October. Collectively, they want to increase the number of young voters - those aged between 18 and 24 - and voters of all ages in general.

While the total number of Hawke’s Bay people who cast a vote in 2016 was better than the national average, this was still only a 42% turnout, and less than half of all eligible voters aged over 18.

Voting means you can have your say on who represents you and makes decisions on your and your community’s behalf, helping to shape the future of your local and regional councils, and District Health Board.

While the total number of Hawke’s Bay people who cast a vote in 2016 was better than the national average, this was still only a 42% turnout, and less than half of all eligible voters aged over 18.

Nationwide, councils look after a huge range of community assets worth billions, including libraries, parks, playgrounds and pools, 90% of New Zealand’s road network, the bulk of the country’s water and wastewater networks and the environment we all depend on.

The HBDHB is a Crown Entity and the Government’s funder and provider of public health and disability services across the region.  It spends close to $600 million per year, or approximately $1.6 million a day, on providing health care to Hawke’s Bay people. The DHB is the region’s largest employer and works with consumers, stakeholder communities and other health and disability organisations to plan and coordinate equitable, effective and timely health care.

Anyone who will turn 18 by the time of the elections is able to pre-enrol now. They will then be automatically enrolled on their 18th birthday.

Voting opens on 20 September, and closes at noon on Saturday 12 October.