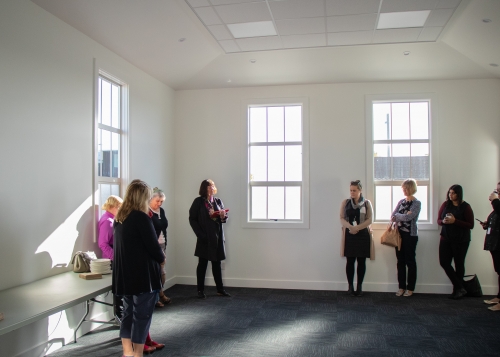 Debates, discussions, and possibly a few dramas  - decades’ worth - have taken place in an unassuming building in Taradale that has been given a new lease of life by Napier City Council.

The Lee Road building formerly known as the Taradale Borough Council Chambers, recently re-opened as Co-Lab Taradale, home to four community organisations, and available to hire for meetings and events.

Several years ago the last of the organisations which had been using the building moved out of what had become a dark and dingy, rather unloved structure. In 2016 Council carried out a feasibility study, including gathering feedback from the wider community, to help weigh up the options for its future, leading to the $500,000 conversion to a fit for purpose community facility.

Heart Kids' Adrianne Galvin: "This is huge for us. It’s pretty special for our family support network, just to have this space for our families."

For Heart Kids, whose local branch covers an area stretching from Dannevirke to Gisborne and provides lifelong support to 180 families, it represents the first time locally that it has been based in an office. “This is huge for us, having had to work from our own households. It’s pretty special for our family support network, just to have this space for our families,” says Adrianne Galvin, Services Coordinator.

It can be quite isolating to be in an office by yourself, says Ngaire O’Brien from Parkinson’s NZ. For their worker, who helps with education, information and helping people make informed decisions, to now be part of a community hub is wonderful.

It’s a sentiment Jenny Herbison from Epilepsy Hawke’s Bay shares – the opportunity to be part of a community collective and work collaboratively has been one too good to miss for an organisation dedicated to support and representation for its members.

The building was constructed in the 1930s, after £1500 was raised for the Borough Council chambers and library. It kept the chambers name until the 1968 amalgamation with Napier City Council.

It was known as the Napier City Council Taradale Community Rooms from 1987 until it closed its doors in 2016.

Information about how to hire the facility for meetings or events will be available at www.napier.govt.nz shortly.