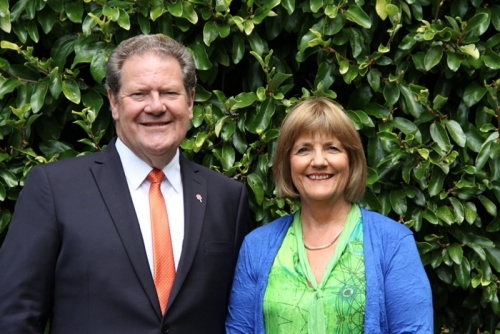 We're saddened to share the news that Mayor Bill Dalton suffered a serious stroke on Tuesday 9 April. We will provide status updates here as we receive them from Mayor Bill's family.

Hawke’s Bay District Health Board, with the permission of Napier Mayor Bill Dalton’s family, is very pleased to advise that Mr Dalton’s medical condition has further improved and his status is now stable.

Mrs Dalton said the family wanted to take this opportunity to thank all medical professionals involved in Bill’s care.

“We would particularly like to thank all emergency service staff involved for their swift response last Tuesday when Bill suffered a stroke, to the wonderful care he has been receiving in Hawke’s Bay Hospital.

“We are fortunate he is in such good hands.”

Mrs Dalton said the family continues to be heartened by the many messages of love and support.

The family have again asked for privacy at this time and will not be providing any further updates.

Some hopeful news on Friday morning. Hawke's Bay Hospital issued another a second statement to advise that Mayor Bill's condition has improved from 'critical' to 'serious but stable'.

NCC's heartfelt thoughts with its Mayor

Our thoughts and love are with our Mayor, his wife Shirley, the Dalton family and his many friends. Kia Kaha, Mayor Bill!

We will provide an update as soon as we have more information. In the meantime, Deputy Mayor Faye White has assumed the role of Acting Mayor.

“Our husband and father, Mayor Bill Dalton, suffered a stroke yesterday and is in a critical condition in Hawke’s Bay Hospital.

“We are with him and we expect his condition to become clearer over the coming days.

“We would like to thank everyone for their kind wishes and support at this very difficult time. However, we ask for privacy and do not wish to make any further comment at this time.”