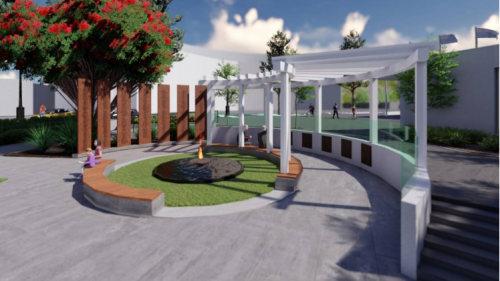 Napier City Councillors would like to see a War Memorial design that incorporates elements from all three designs that went out for public consultation last year.

The Council, with the exception of Napier Mayor Bill Dalton, voted for the amended recommendation put forward by Councillor Annette Brosnan, and seconded by Councillor Kirsten Wise, yesterday at the Strategy and Infrastructure committee meeting.

The Council meet again on Tuesday 5 March and the timing for the final Napier War Memorial design will be decided at that meeting.

The recommendation reconfirmed the decision made by Council in September 2017 to place the War Memorial at the Floral Clock site on Marine Parade. The design elements included the memorial being placed at forecourt level, that a curved wall open to the elements display the reviewed Roll of Honour, and that the perpetual flame be built into the existing building entranceway so it could be viewed when entering the memorial, and at night. They also wish for the original Roll of Honour plaques to be included in the design in some way.

Mayor Dalton said he spoke against the motion because he felt it was too prescriptive, totally uncosted, and bore little resemblance to what the public told Council they wanted.

The Council, with the exception of Napier Mayor Bill Dalton, voted for the amended recommendation put forward by Councillor Annette Brosnan, and seconded by Councillor Kirsten Wise, yesterday at the Strategy and Infrastructure committee meeting.

The public was consulted over four weeks in November and December last year about the three design options. A total of 1298 people responded to an independent survey, provided feedback online and in hardcopy form. More than 200 people engaged in face to face consultation activities.

Earlier in the meeting Council passed a recommendation to accept the updated final Roll of Honour, which now stands at 1058 names.

The review of the Roll of Honour, and research, began in January 2018 as part of the War Memorial project to return the Roll and Perpetual Flame to the Napier War Memorial Centre site. The research found good and legitimate reason for 15 names which were on the 1995 Roll to be removed.

The new Roll of Honour comprises war dead from the South African War, WWI, WWII, Occupation of Japan, and Vietnam.

The Napier War Memorial Centre building was extended in 2016. As part of this extension memorial elements were removed and stored pending a decision on a site for their relocation. In July 2017 it was agreed between NCC and the presidents of the Napier and Taradale and Districts Returned Service Associations to establish the memorial in close proximity to the building. That September NCC resolved to locate it at the floral clock site, and move the floral clock to the sunken gardens.

In June 2018 Council resolved to release three designs for public feedback, the design that housed the elements within an annex to the building was withdrawn at the request of the designer. Subsequently a third indoor design option was offered by a member of the public, Craig Morley, to replace the annex design that was withdrawn, and in October Council amended its June resolution to allow this.