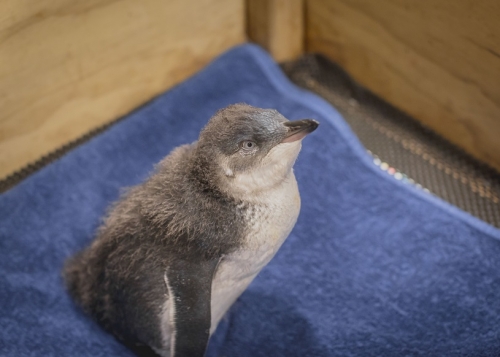 And what better day to introduce the newest member of the Little Penguin family at the National Aquarium of New Zealand than on Sunday 20 January - Penguin Awareness Day.

Currently called Dave, he (or she) is the offspring of two of Penguin Cove’s residents, Captain and Flip. The third penguin hatched and raised at the National Aquarium of New Zealand, Dave is just under three months old.

Penguin Awareness Day helps raise awareness about the flightless birds, whose numbers are dwindling by the day, their habits, and conservation of penguin habitats. Dr Adrian Fowler, National Aquarium Director, is aware how important such an awareness day is for charities such as SANCCOB (The Southern African Foundation for the Conservation of Coastal Birds). Before taking up his appointment the wildlife vet spent time in Cape Town treating and rehabilitating wild penguins. “Our Little Penguins are important ambassadors for their species, highlighting the impact that humans are having on our wild friends," Adrian says. "They help us to educate people about being more aware of taking care of their environment."

But back to Dave. The team are in the process of determining the sex of the chick, which can only be done by examining the DNA. The easiest way to do this is by sending away a feather, after the adult plumage comes in, at about eight weeks old, to a specialist laboratory.

National Aquarium Director, Dr Adrian Fowler: "Our Little Penguins are important ambassadors for their species, highlighting the impact that humans are having on our wild friends. They help us to educate people about being more aware of taking care of their environment."

Dave was a bit unwell at first and the team handraised him from when he was 15 days old. With the special care and medication he has grown into a healthy penguin. His latest achievement is getting used to the water – even penguins need swimming lessons – and socialising with the others. He now spends the day in the enclosure, loves swimming and meeting all the visitors to the National Aquarium. He also has a very healthy appetite.

Due to being hand-reared, Dave will remain at Penguin Cove as he is now a VIP (Very Important Penguin) and established member of the colony.

Flip and Captain, who share a burrow, are both permanent residents at Penguin Cove as they wouldn’t survive if released in the wild. Eight-year-old Captain is missing an eye from an altercation with another sea bird, while Flip, six, lost her left flipper due to being entangled in a fishing line. The keepers regard the pair as some of the best behaved at Penguin Cove. Flip is a good role model and stands up to others if Captain is being picked on. Captain, meanwhile, is known for being punctual at mealtimes. He never neglects his incubating duties.

The National Aquarium’s Little Penguin permanent residents have been brought in because they’ve been abandoned as chicks, are partially sighted, have become sick in the wild, or been injured in dog attacks.

However, the National Aquarium is also a rehabilitation centre for Little Penguins, returning them to the wild when they’re recovered and ready.