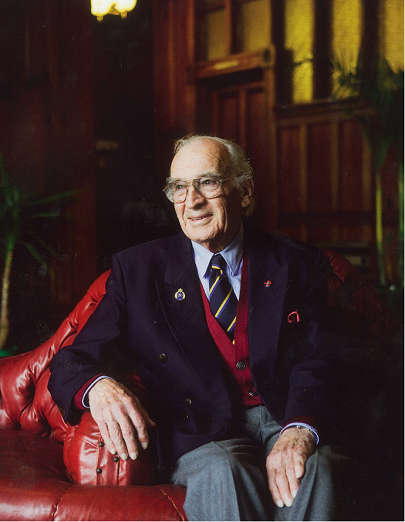 Two Napier icons honoured with one of the city's most prestigious awards.

Napier RSA President, John Purcell, has an outstanding record of service - he's volunteered for Rotary, the Napier Ostomy Society and Kneecap Trust. He also sat on a committee attached to The Kimberley Centre, supporting parents and friends of those with intellectual disabilities.

Well-known Napier architect Guy Natusch and RSA stalwart John Purcell have been honoured with the Napier Citizens Civic Award for Meritorious Contribution to the Community.

The ceremony took place before a large crowd of family, friends, and former colleagues at 5pm tonight (15 November), at the Napier Conference Centre at the Napier War Memorial Centre. It was led by Mayor Bill Dalton.

Mr Natusch, MNZM DSC, is a third-generation architect who has designed many Napier buildings, including the Red Cross Hall, War Memorial Hall and the Wool Exchange.

Prior to completing his architectural degree at Auckland University, he was seconded to the Royal Navy during WWII. He was awarded a Distinguished Service Cross for his involvement in the D-Day flotilla aboard HMS Stayner protecting the western flank of the armada from the German e-boats (fast attack craft).

Mr Natusch has spent more than 50 years volunteering for Heritage NZ and the Historic Places Trust locally and nationally.

He is also recognised for his efforts to maintain Napier’s Art Deco identity, and has helped save many historically significant buildings in the Napier CBD, including the Central Fire Station which he transformed into the Desco design centre. He has also acted as a voluntary advisor to the Art Deco Trust.

Mr Purcell, JP QSM, has been a volunteer for more than three decades.

Of Ngati Kahungunu descent, he served for many years in the Royal New Zealand Navy, and upon leaving joined the Department of Corrections, becoming Superintendent of the old Napier Prison and then the first Superintendent of Mangaroa Prison.

A member of the Returned Services Association (RSA) for more than 52 years, and President of the Napier RSA for 12, he is one of Napier’s longest-serving presidents in its 100-year history.

He has also been its Vice President and War Pensions Officer, and is still heavily involved in veteran support and other associated committees.

The number of voluntary organisations Mr Purcell has been a part of is long, ranging from Rotary to the Napier Ostomy Society and the Kneecap Trust. He also sat on a committee attached to The Kimberley Centre, supporting parents and friends of those with intellectual disabilities.

Mr Purcell also spent seven years on the Hawke’s Bay District Health Board disability support advisory committee, and has been Secretary and Treasurer of the 28th Battalion “D” Company (‘The Maori Battalion’).

There have only been eight previous recipients of this particular award since the Napier Civic Awards were established in 1977. They recognise those who have given outstanding service to Napier and whose efforts have had a major impact on the city, but whose contributions may not fit the criteria for Citizens’ Civic Awards, which are primarily for exceptional voluntary service.