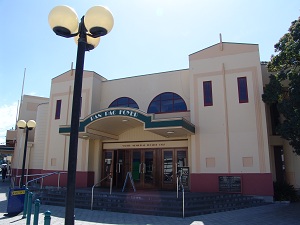 Napier City Council appointed Strata Group Consulting Engineers to assess the theatre to ensure it was up to new building standards (NBS).

The results confirm the building is not earthquake prone.

“We are delighted the building has come back with such a strong result,” Napier City Council chief executive Wayne Jack said.

The scope of work included a full site walkover, a review of the existing structural plans, seismic modeling and reporting on the building strength relative to new building standards (%age NBS).

The objectives of the report were to:
-    Identify potential structural weaknesses that may arise during an earthquake.
-    Predict the building’s current seismic capacity based on the available information and information gathered from site observations

“Our patrons and clients can be assured previous strengthening work done on the Municipal Theatre has ensured it is a safe venue,” Mr Jack said.

History of the Municipal Theatre building

The original municipal theatre building was constructed in 1911. In the 1931 earthquake, the building suffered excessive damage and the new theatre was rebuilt in 1938. Minor modifications were undertaken during the following 50 years.

Redevelopment of the theatre was commissioned in 1992 and was completed in two stages during the next five years. The building has been categorized as ‘Historic Place Category 1’ by the New Zealand Historic Places Trust.