One on five Napierites are aged over 65+ - a proportion that's rising all the time. We're working with our senior citz on a community-wide Positive Ageing Strategy for Napier. 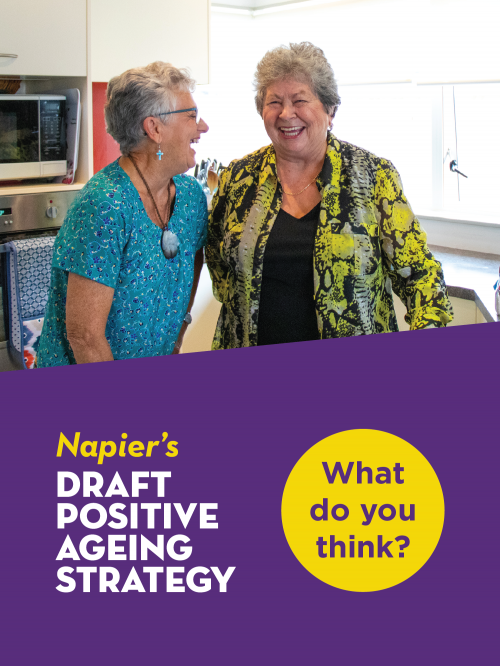 Like many provincial cities in New Zealand, Napier is "getting older". One in five Napierites are aged over 65 today, a number forecast to climb to one in four by 2030. Remarkably - and for the first time in our history - our 65+ cohort will then outnumber our children. Dad's Army and Downton Abbey are destined to take over from Dora the Explorer and Dorothy the Dinosaur.

This demographic shift presents both challenges and opportunities for Napier. That's why we've been working on a Positive Ageing Strategy (900 KB) over the past couple of years. We drew on the framework of the national Positive Ageing Strategy (launched in 2001) and 2018's updated plan, Better Later Life - He Oranga Kaumātua 2019 to 2034. But we wanted to shape Napier's strategy around the particular needs of our older folk.

A number of agencies contributed to the strategy which was released - in draft form and for public consultation - in July 2019. These include Hawke's Bay Regional Council, Hawke's Bay DHB, the Ministry of Social Development - and a host of community organisations that provide services to older people. We were also fortunate to have guidance from a reference group of residents with a lived experience of ageing.

Our draft Positive Ageing Strategy was released on 29 July 2019 and opened for a month-long public consultation (note: we're keen for feedback from all Napierites, older folk and younger older-folk-of-the-future - please share your ideas with us at www.sayitnapier.nz). You can read the full strategy online (900 KB) and, if you're extra keen, you can also read our background document (3.4 MB). It has more information on how we developed the Strategy, along with fascinating census figures and projections.

1. Being informed & involved – Kia mōhio, kia mahi
Having access to information and resources about services and support so people feel well informed and are prepared for ageing.

2. Being safe – Kia haumaru
Having a safe city, safe neighbourhood, and safe streets so people feel safe to age in their community.

3. Community spirit – Te wairua hapori
Feeling valued and having social connections with family, friends, and the community so people feel a sense of belonging.

4. Getting around – Hāereere
Ensuring services and facilities are easy to get to and affordable and accessible transport options are available.

6. Housing – Ngā whare
Having suitable housing options that are affordable and accessible so people are safe and secure, warm and healthy, and feel part of the community.

7. Things to do – Hei mahi
Having accessible, affordable facilities, recreational and leisure spaces, and cultural activities so people have the opportunity to participate.