The background to the new aquatic facility

The journey to a new aquatic facility started back in 2014 in response to community demand. 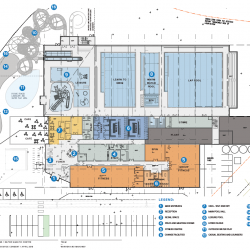 Where are we up to?

Read the latest update on the status of this project here.

The concept design and engineering has been completed. The floor plan pictured above is a part of this (click to enlarge). The design and fit out will be fiscally responsible but will still be an attractive and future-proof facility which Napier residents can be proud of and enjoy for many decades to come. We have saved millions of dollars and months of time through adapting an existing architectural plan to suit our community’s needs.

We have completed site improvement earthworks on the corner of Tamatea and Prebensen Drive, in preparation for the proposed new aquatic facility. A separate consent was granted to carry out preloading works, which has no bearing on the construction resource consent process. The construction of the facility is still subject to a court hearing which took place from 30th September at Wellington High Court. The outcome of this case is expected in the first quarter of 2020.

In the meantime, NCC is pleased to have come to an interim relief position through the Court, which will enable some scheduled work on the new aquatic facility to continue as planned. This means that work can continue with the resource consent process, preloading earthworks, the evaluation of tenders received and acceptance of the preferred tenderer by Council. The tender process closed in July. Any final award of the contract will await the final outcome from the 30th September High Court hearing.

The opportunity to preload before resource consent has been granted came about by NCC acquiring access to suitable fill that is below market rate. By using this fill now, NCC will save several months of project time, resulting in significant cost savings. Preparation of the site requires ‘preloading’ work, which means placing fill on top of the ground at the new building site. The purpose is to allow the fill and existing ground to settle and compact to a satisfactory level. This will be a period of at least three months. The site requires preloading no matter what is ultimately built there.

What about a 50m pool? Won't the proposed facility, based on Christchurch’s new QEII facility, be too small and need immediate expansion?

No - the main lap pool is larger than the Ivan Wilson Pool and Old Pool combined.

In addition to the main lap pool, four other pools will be in the new facility:

Providing too much space in one single pool that will be unused most of time adds significant cost to both the build and operating costs, increasing the burden on ratepayers.

How much will the proposed Tamatea Dr/Prebensen Dr aquatic facility cost?

The project has a capital cost of $41.3 million as outlined in the 2018-2028 Long Term Plan. This will be funded through $34 million in loans and $7.3 million from reserves. Total operating expenditure per year will be $3.3 million (including depreciation and interest on borrowings), and funded through rates and user charges.

How much will the new aquatic centre add to my rates?

What's the background to the proposed new aquatic centre?

After the Napier Aquatic Strategy was adopted back in 2015, two independent consultants, both based in Wellington, were brought in to assess the development of a facility at the Onekawa site. They were The Building Intelligence Group (TBIG), who are Construction Project Management specialists, and Rider Levett Bucknall (RLB), a multi-national corporation specialising in cost management, quantity surveying, project management and advisory services. Their feasibility studies highlighted significant risks with the Onekawa location, which drove Council to explore options for alternative sites.

The main issues that were identified with the Onekawa site was the risk of contaminants in an old landfill underground, which are currently covered and sealed by a layer of clean soil. These contaminants are safe while left undisturbed. The groundworks will require digging to a far greater depth than a standard residential build, and could create a health risk by exposing airborne contaminants, as well as the risk of a cost blow-out due to unknown factors.

The decision to change from a 50m pool to a 25m pool was made when a new 50m pool was confirmed for the Regional Sports Park in Hastings. It was decided that the region doesn’t need two pools of that length within close proximity.  Sport New Zealand also supported this decision and endorsed the development of the aquatic facility on the corner of Tamatea Dr and Prebensen Dr. The new site is capable of extending to a 50m pool in the future, if there is the demand for it.

Moving to this new site means the wider community and current regular users of the Onekawa pool will not be without a pool during the 18-20 month construction period. Being without a pool for that length of time would seriously impact many groups that use the pool, such as learn to swim classes, swimming programmes and clubs as well as those who use it for general leisure and play. The Napier Aquahawks Committee support Council’s plan and look forward to working with NCC as the project progresses.

After the pool has moved, the Onekawa site will be turned into a new recreational space for the community to enjoy. The community will have opportunity to share their views on what they would like to see.

Why demolish the Onekawa pools? The pool has just been strengthened.

If the earthquake strengthening work hadn’t been carried out on the Ivan Wilson building housing the main indoor pool, spa pools, hydroslides and learners’ pool, we would have had to close two years ago.

Why move it away from schools?

There are other schools which will be closer. Moving a facility will always have those that benefit, and those that don’t.

No. Access will be from Tamatea Drive, more than 200m from the Prebensen Drive intersection.  We are consulting on changing Tamatea Drive from a 70 km/h zone to a 50 km/h zone. Currently 92% of users drive to the facility. There is an iWay pathway near the site now, and foot and cycle traffic will be considered as part of the project.

The whole community should be able to access aquatic facilities. The current site is on a bus route, what about the new location?

The proposed site is 3.2km away from the current site. There’s little difference in the size of the population living within a 3km radius of both areas, and there is large population growth closer to the new site. Hawke’s Bay Regional Council are in charge of bus routes in Napier. Discussion is underway with the Regional Council to provide a bus stop to the facility  once it is opened - off-street, right outside the entrance. The nearest bus stop to the existing Napier Aquatic Centre is 500 metres away.

What are the risks associated with the Onekawa site?

The Onekawa site is built on an old landfill, with the likelihood of buried hazardous materials such as asbestos, oil and lead. We won’t know the exact levels or quantities of these materials until the ground is literally peeled back and opened up. Not even test drilling will guarantee what is below the surface, as there could be contaminants either side of any drill hole. Any contaminated soil will require a special process to remove, with the potential of significant cost and time increases to the project. There is also the risk that contaminated gases and dangerous dust particles could leak into the air which is particularly of risk to the very young and old.  We have a kindergarten and Plunket centre on this site.

What are the benefits of the Tamatea Dr/Prebensen Dr location?

The site has many positive attributes that was evident when feasibility work was undertaken:

What are the main considerations when assessing a new aquatic centre?

There were three main areas of consideration that we looked at when deciding where to build the new aquatic centre, as outlined below:

What was the criteria when considering an alternative site to Onekawa?

When the risks and costs (contamination, pool closure) associated with the Onekawa site were known, we looked at a number of alternative sites to understand if there was a better location. All alternative sites were considered based on the following criteria:

How does the new site stack up, compared to Onekawa?

The tables below show how the two locations stack up against the project vision and build requirements.

The current site has pools, netball/tennis courts and Omnigym, but there are other organisations (eg. Plunket and Onekawa Kindergarten) there, which are not recreation-related. There isn’t much room to expand. The new site is 7ha, providing much greater potential to create a recreation hub in the future if required. It is also close to Park Island.

What is the vision for the new aquatic centre?

When looking at all options of the new aquatic centre, decisions were based on the how the facility will benefit our communities’ health, wellbeing and cohesion, and can be a source of community pride. This is further broken down into six key areas.