As of 11:59pm Wednesday 13 April, all of New Zealand is at orange of the COVID-19 Protection Framework or traffic light system Click here for more information on Life at Orange. Read more »
Keyword: #marineparadecalming

Launched in August 2017, the Marine Parade Traffic Calming Project was a 'live study' to see if we can make the city end of the iconic Marine Parade more pedestrian-friendly and less of a heavy vehicle route.

Napier City Council is embarking on a 'live study' in a project focusing on traffic calming on the Marine Parade. 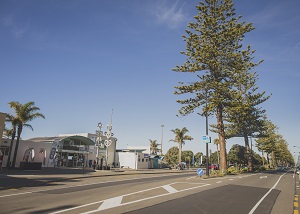 Marine Parade has long been Napier’s premier waterfront attraction, from the time Victorian-era ladies and gentlemen paraded in their finery, through both World Wars, and the resurrection of a new city following the earthquake.

Today its success as a destination for locals and visitors is impacted somewhat by the volumes, speed and size of vehicles that rumble along its route day and night.

The Marine Parade Traffic Calming project is a ‘live study’ that will see if a small change in the way vehicles are directed along a portion of Marine Parade has a positive effect on the use of this Napier icon by increasing the numbers of pedestrians, slowing vehicles, and encouraging heavy vehicle drivers to use alternative routes.

Many people have experienced the relaxed and carnival atmosphere when Marine Parade is closed to traffic for events. It would be nice if we could maintain this street environment year-round, however Marine Parade is an important part of Napier’s street network that needs to be accessible to cars, delivery trucks, coaches, and tourism operators. It also provides carparking, both for attractions and businesses along the waterfront, and for the CBD. 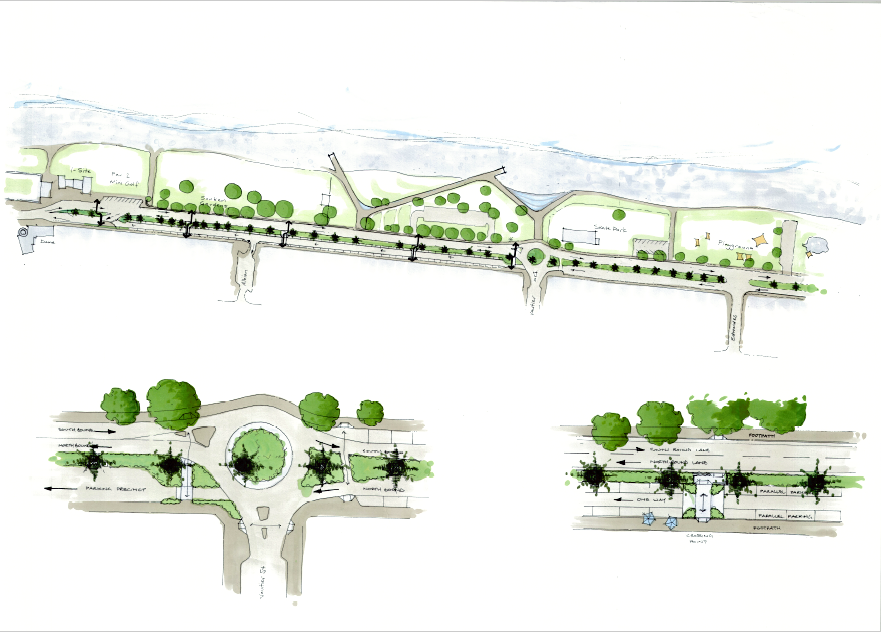 The City Vision advocates for the trialling of projects where temporary measures are possible. This ‘lighter, quicker, cheaper’ approach allows us to try things out before investing in more permanent and expensive infrastructure, and to be brave and have fun with design choices. It is an approach used both locally (eg, Tennyson Street parklet, Market Street Urban Oasis) and internationally, such as New York’s Broadway Avenue redesign.

The Marine Parade Traffic Calming proposal affects the area of Marine Parade between Vautier Street and the i-Site, and includes:

Other than the construction of the roundabout, which has already been part of Council’s work schedule for some time, and some changes to the median and on-road parking bays at the i-site end, all other changes are signalled using paint and signage only. Following the trial, if the project is deemed a success, then more permanent changes will be made to the streetscape, and may include widened footpaths, cycle lanes, paved pedestrian crossing points etc.

Benefits of this design may include:

Work on the roundabout is expected to commence on 21 August 2017, with work completed November 2017.

Our data collection for this trial will include:

Over a six month period, feedback was received from users, via meetings and ongoing correspondence with tourism operators. A commitment was made by NCC to make iterative changes to the layout to address the valid concerns raised during this feedback period. Positive feedback has been received about the operation of the parking precinct  and how amenity has improved for businesses and residents on the city-side of the street. Average traffic speeds within the through-lanes remain the same, 46kph, and percentage of heavy vehicle numbers have not reduced as a result of this new layout. Vehicle speeds within the parking precinct are considerably lower than the throughlanes. While we have not achieved all of the project objectives, the iterative process allows the team to learn and evolve the design over time, trialling new initiatives until the project objectives are achieved.

The inclusion of a dedicated cycle lane on the seaward side of the through-lanes, as well as markings in the parking precinct alerting motorists to the presence of cyclists have already been implemented. Design for the installation of three courtesy crossing raised platforms is complete and is scheduled to be installed.