A badly-needed 10-toilet, four-change room and three-shower block opened at Humber Reserve by Pandora Pond in 2017. 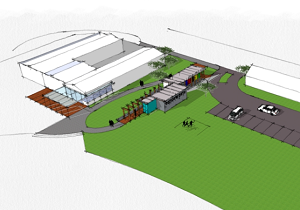 A new public toilet and shower facility at Pandora Pond opened in late 2017.

This new facility replaced the current ablution block, providing more toilets and changing rooms for the public to use, particularly during the peak summer season.

Pandora Pond’s increasing popularity, the increasing number of events being held there, and community demand for better toilets and change facilities prompted the build.

The new facility, designed by Graham Weaver Architects, looks similar to the Spriggs Park Pavilion, off Hardinge Road in Ahuriri. When demand is low, one section can be closed off, with both sections able to be opened for public use at busy times.

The current car park will be permanently closed – its replacement will not be built until late 2018.

Landscaping will be completed once the new car park has been built.