Napier is famed for its trees and gardens. A four-year tree planting project that began in 2010 added more trees - a mixture of natives and 'Napier natives' like our iconic Norfolk Pines - to the city. 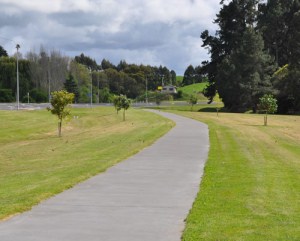 The “Greening of Napier” was a Napier City Council project aimed at enhancing the cityscape with more tree planting along major roads and open spaces.

The project was carried out over four seasons with the first trees planted in Westminster Avenue and the southern Prebensen Drive area.

Napier’s newest residential subdivision, Parklands, also benefitted from the project with a selection of trees planted on the Orotu Drive greenbelt.

Six pohutukawa were planted at Pandora, extending the native planting theme from around the Ahuriri waterline where there are a number of specimen “New Zealand Christmas trees”.

The third planting season targeted several areas close to the city centre. A natural hybrid of pohutukawa and northern rata, Metrosideros “Mistral” – a variety with a tidy, compact and upright habit – was chosen for the western side of McGrath Street. Jacaranda trees planted at the Balmoral end of Wellesley Road pick up a theme for jacarandas on the western side of downtown Napier.

Thirty young Norfolk pines were planted in Beacons Reserve, on the seaward side of the Rotary pathway between The Esplanade and Ferguson Street South. The area between the pathway and the railway tracks was planted mainly with Pittosporum crassifolium and pohutukawa.

The Greening of Napier draws on a mix of native and exotic varieties to ensure autumn colour, some year-round foliage and a diversity of form. Upright deciduous varieties are chosen for medians and berms to avoid blocking winter sun and issues with branches encroaching onto traffic lanes or private property.

Where possible, the landscaping team chose large specimens for their impact. A digger was used to form holes for the largest trees, but a two-person team plants most by hand.

The last plantings were the 12 Metrosideros Mistral (a Rata/Pohutukawa hybrid) trees on the northern side of Carlyle Street. The trees were placed in specifically designed planter boxes, similar to those found at Auckland’s Britomart, as underground infrastructure in the vicinity made in-ground planting too problematic. 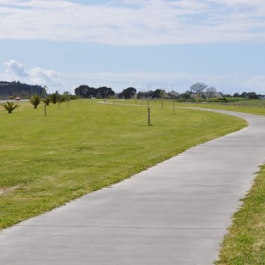 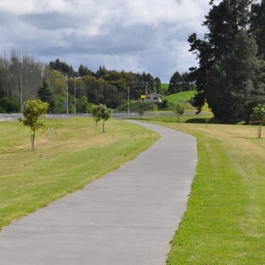