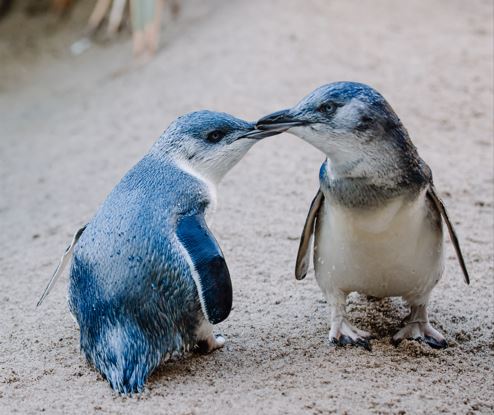 Rachel Haydon, General Manager of the National Aquarium explains that it is an achievement for kororā to breed successfully in captivity,

“Most of our kororā are rescued birds unable to survive in the wild. It is brilliant to see some of our birds become parents.”

Many penguins are injured by dogs, cats and seals or by hazards in their natural habitats, says Becs Cuthbert, Supervisor of Birds at the National Aquarium. Martin came to Penguin Cove after a predator attack while Burny had her feet burnt by a beach fire that wasn’t fully extinguished.

“Napier has a large kororā urban population, with many nesting along the coast from Napier Port to Westshore,” says Becs. “It should be something we are really proud of and that means respecting the kororā habitats.”

One of the ways humans can help the species is for dog walkers to ensure their pets stay on lead during kororā nesting season, from July through to February.

Little penguin chicks mature in eight to ten weeks, by which time their first adult feathers will have grown, and they are ready to start “learning how to penguin”, explains Rachel Haydon.

The new kororā youngsters are making their presence known at Penguin Cove. Eric is a swimming protege, dedicating a fair bit of each day causing a stir in the pool. Squishy is a social butterfly, while Pipi is a little on the shy side with the grownups.

Eric is the offspring of Martin and Burny while Pipi belongs to Betty and Mo. Captain and Flip are parents to Squishy and his older brother Dave (born in 2016), a content (and sometimes naughty) Pengin Cove resident.